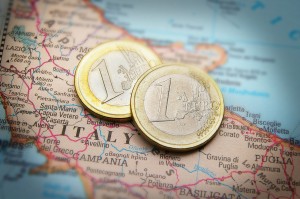 Advent and Bain have already made more than 20 investments globally in the highly technological payment industry, including Copenhagen-based Nets and London-based Worldpay.

“We … believe that ICBPI has tremendous growth and innovation potential both organically and through acquisitions,” Luca Bassi, Managing Director at Bain Capital Europe, said in a joint statement by the private equity consortium.

The Italian cooperative lenders that own ICBPI, led by Credito Valtellinese, had decided to sell the profitable asset due to regulatory pressure to bolster their capital bases.

Milan-based ICBPI, which employs 1,900 people and operates brands such as Cartasi, reported 2014 revenues of 670 million euros and core earnings of 195 million euros. It also operates in interbank clearing and securities services.

Current ICBPI shareholders will keep an 8 percent stake after the acquisition which is subject to clearance from antitrust authorities and the European Central Bank, the statement said.

Rothschild, HSBC and Vitale & Associati were the financial advisors of the private equity consortium.

(Reporting by Danilo Masoni for Reuters)