According to a report from Preqin, in the past three years, 71 percent of alternative-asset funds closed above their listed targets. That group includes 40 percent of funds concluding at their hard caps and 16 percent finishing on commitments over the hard caps.

These proportions grew from roughly a decade ago. Spanning 2007-2010, 51 percent of funds either closed at target or wrapped up below them.

Buyouts fundraising data corroborates this. Of the 123 funds with listed targets that closed in 2017, 90 (73.2 percent) reached above their goal, 27 (22 percent) hit their targets exactly and six (4.9 percent) came in below.

Vista Equity Partners held the largest close by amount above its target. Vista’s sixth flagship soared to $11 billion in total, which was $3 billion over its intended goal. Silver Lake also had a very prosperous close for its fifth primary vehicle. Silver Lake Partners V ended up with $15 billion, $2.5 billion above its original aim. Both Vista and Silver Lake specialize in the high-technology sector.

North America and Europe had the highest percentage of funds closing above target. Buyout funds were the most successful strategy compared with venture capital, growth and the catch-all “other” category. Finally, size matters, as funds with targets above $500 million had the most closes at and above their hard caps.

On the whole, private equity had a very healthy year. Buyouts reported $231.3 billion was raised in 2017, the highest number since 2008. 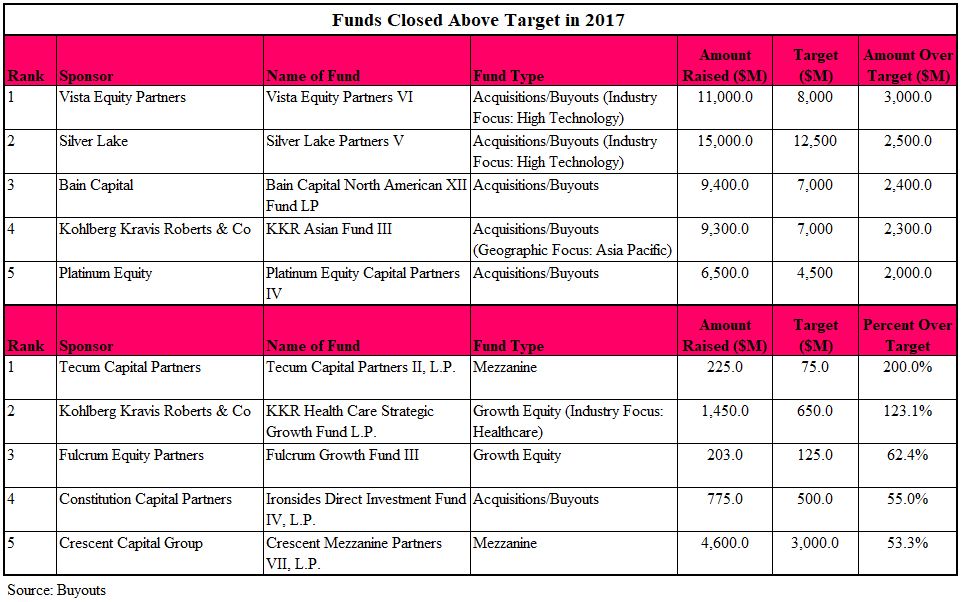 Preqin’s data covers global firms across many sectors of alternative investing. These sectors include buyout, growth, venture capital, funds-of-funds, secondaries, and other closely related fund types. It does not include mezzanine funds.