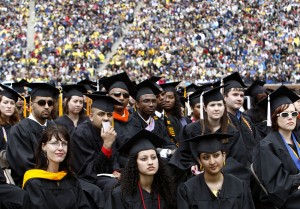 The average allocation to alternative strategies among 426 colleges and universities grew by five percentage points year over year, jumping to 58 percent among early reporting institutions, according to the NACUBO-Commonfund report. The average alternatives allocation for larger institutions, those with more than $1 billion of assets, stood at 65 percent.

Although the findings are preliminary, “there’s no question that overall allocations to alternatives are going up,” Commonfund Institute Executive Director John Griswold told Buyouts.

Griswold said that several factors could have influenced the spike in alternatives allocations, which include private equity, venture capital, distressed debt, natural resources, real estate and marketable alternatives strategies. Many larger institutions reallocated their portfolios to focus more heavily on illiquid strategies, he said, noting that the previous fiscal year was strong from a private equity fundraising standpoint.

“We don’t know yet; there’s not really enough of a sample to take anything away from [the preliminary data],” Griswold said. The NACUBO-Commonfund Study of Endowments will release its final data in January 2015.

The National Association of College and University Business Officers (NACUBO), which counts roughly 2,500 colleges, universities and service providers as members, partners with Commonfund every year to track changes in endowment performance and allocations. Commonfund manages approximately $25 billion for institutional clients.

In addition to finding higher allocations to alternative assets, NACUBO-Commonfund’s preliminary findings indicate that early reporting institutions’ endowments returned an average of 15.8 percent net of fees for the fiscal year ending June 30. The early return data marks a significant improvement over FY 2013’s 11.7 percent average return, according to the report.

Larger endowments generated the highest returns during the fiscal year, netting 16.8 percent. Institutions with between $501 million and $1 billion of assets netted 16.2 percent.