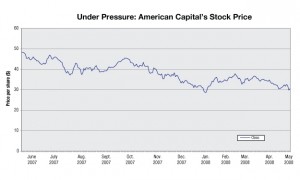 ended a rough week in a surprising position: up. Stung by reports of office closures and layoffs (true), as well as an imminent huge write-down in its debt portfolio (also true), the publicly traded business development company nonetheless emerged relatively unscathed.

As of May 7, American Capital’s stock (Nasdaq: ACAS) was trading above $31 per share, about where it was a week before, even after the company announced a loss of $4.16 per share, or $813 million, for the quarter ended March 31, down from a profit of 86 cents per share, or $134.2 million, a year before. Moreover, the stock price was higher than it was before the Wall Street Journal published an article on May 5 suggesting that a newly implemented accounting rule would force American Capital to write down the value of its loans to mid-market companies. That article prompted a downgrade from an analyst and a sell-off of the company’s stock. The firm lost 7 percent of its market capitalization, or nearly $450 million, in one morning of trading on May 5.

The quarterly loss stemmed from a nearly $1 billion write-down in the company’s debt holdings. The largest portion of that write-down came from American Capital’s structured finance holdings, however, and not from its exposure to buyout deals, although the underlying credit quality of some of the company’s new loans looks shaky, according to analysts.

At the same time, American Capital was contending with press reports from the previous week that its buyouts chief in Britain had stepped down, and that the company was ordering layoffs and shutting down two offices in the United States. American Capital subsequently confirmed all of these details. It closed its San Francisco and Philadelphia offices and named a new head of its buyout group in London. The restructuring resulted in the layoffs of 80 people. The 600-employee company also opened a second Boston office to focus on providing loans to mid-market financial sponsors.

Even though write-downs caused the quarterly loss for American Capital, the write-downs still weren’t as large as initially projected. Just like rival private equity firms, American Capital began contending this year with a rule known as Financial Accounting Standard No. 157. It’s a GAAP measure that requires asset managers to price their holdings at fair value rather than at cost. American Capital had been holding a portion of its $6 billion in loans to mid-market companies as though they were worth full value; meanwhile, the debt on some of those companies was trading as low as 80 cents on the dollar. Analysts had concluded that American Capital’s potential write-downs because of FAS 157 would be greater than its BDC peers.

As a result of compliance with FAS 157, American Capital wrote down the value of its holdings in mid-market companies by $180 million. Those write-downs came about because comparable public companies have experienced declines. The company took a far bigger hit from in its structured-finance portfolio, a group of assets that include collateralized-loan obligations and commercial mortgage backed securities. In a move unrelated to FAS 157, American Capital marked down the value of those holdings by $360 million. But analysts knew the latter hit would be on the way, in part because American Capital had taken “punitive marks” on its structured finance portfolio in previous quarters, according to Troy Ward, an analyst with Stifel Nicolaus who covers BDCs.

The “more worrisome bucket,” Ward said, was the $147 million write-down that American Capital booked because the companies it invested in, primarily in 2007, haven’t performed well lately. “That’s actual credit deterioration,” he said, adding that the write-down doesn’t bode well considering that these generally are highly leveraged companies operating in an increasingly soft economy, factors that don’t shown signs of easing any time soon. “We’re still cautious on credit quality. A lot of capital was put to work in 2007.”

About one-third of American Capital’s loans back companies purchased in 2007, according to a Stifel Nicolaus research report by Ward and colleague Greg Mason. In the report, the pair predicted that “this vintage may likely underperform historic performance metrics.”

The company, however, dismissed those concerns. In a conference call with analysts, American Capital Chief Operating Office Ira Wagner acknowledged that there were “specific issues that we’re working on” with portfolio companies. But he said the companies were fundamentally sound and on track to produce strong returns. And Malon Wilkus, American Capital’s CEO, said that he “honestly can’t look at [the 2007] portfolio and say that we’re not performing as well as” another year’s portfolio.

American Capital also wrote down an additional $300 million related to its European business and other investments.

American Capital’s closest peer, ., also contended with write-downs for the same quarter. Its write-down due to FAS 157, however, was a much smaller $9 million. Allied Capital also suffered the biggest write-down in on its structured finance holdings, taking a $78.7 million hit for the quarter. The company reported a net loss of $40.7 million, or 25 cents per share, down from a gain of $133.1 million, or 87 cents per share, a year before.