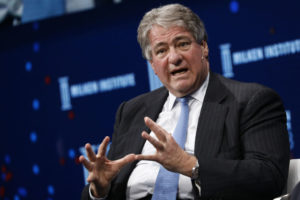 Apollo Global Management is set to focus on the reputational risk of its executives after CEO Leon Black said he would step aside following an investigation into his relationship with convicted sex offender Jeffrey Epstein.

Black will step down on or before his 70th birthday in July, according to a letter on Monday to the firm’s limited partners seen by Private Equity International. He will remain as chairman of the Apollo board, while co-founder Marc Rowan will succeed him as chief executive.

As part of the move, the New York-headquartered alternatives giant, which ranked 14th in the latest PEI 300, will make changes to its shareholder structure and board governance.

Apollo had hired law firm WilmerHale to conduct a review of the firm’s reputational risk management and corporate citizenship practices to identify any potential gaps and make recommendations for additional improvements.

WilmerHale’s recommendations, outlined in a letter dated 24 January and seen by PEI, include:

Conducting periodic background investigations on prominent executives’ outside activities, “akin to what he or she would face if being newly appointed” to the role. This would parallel Apollo’s approach to vendors.

The firm could offer, as part of an executive’s compensation, access to a consultant or counsel to advise the executive on questions of reputational risk or crisis management.

Focus on reputational risk should be similar to benchmarking exercises the firm undertakes for anti-money laundering and ESG standards.

In the letter, Black said he intends to recommend that Apollo adopt all of WilmerHale’s recommendations.

Black also noted that investors had asked Apollo about its approach to reputational risk.

“As a firm, we historically have taken a conservative approach to issues that could give rise to reputational concerns – such as legal, regulatory, or security risks,” Black wrote. “In recent years, however, the reputational risks facing Apollo and the entire industry have dramatically increased due to a variety of factors, all of which have resulted in enhanced public scrutiny of our business.”

“In addition, I recognise that as Apollo has matured, the firm takes on an enhanced obligation to demonstrate leadership in the increasingly critical environmental, social and governance (‘ESG’) areas.”

Black will focus on strategic planning, growth initiatives and investment opportunities as chairman, according to the letter to LPs.

Black’s announcement followed the conclusion of an investigation launched by Apollo’s conflicts committee in October and conducted by law firm Dechert.

The law firm found no evidence that Black or any employee of the family office or Apollo was involved in any way with Epstein’s criminal activities at any time and said there was no evidence that Epstein ever introduced Black, or offered to introduce Black, to any underage woman.

Epstein and his entities did not invest in any Apollo-managed funds, Dechert found, noting that Epstein made repeated efforts to ingratiate himself with other senior executives at Apollo and appears to have relied on Black to help him make those introductions. It said there was no evidence of any other Apollo executive ever retaining Epstein for his services.

Apollo will be hoping Dechert’s findings end months of uncertainty for the firm’s LPs, some of whom – such as the Pennsylvania Public School Employees’ Retirement System, according to a Financial Times report – had been holding off on new commitments to its funds. The FT report also noted Finnish pension fund Keva and two UK local authority pension funds had raised concerns about Black’s relationship with Epstein and were seeking further information.

“Despite our progress in fundraising… we expected that some investors may look to pause new commitments to Apollo over the near term, at least until the independent review being conducted by the conflicts committee has been completed,” chief financial officer Martin Kelly said on the firm’s third quarter earnings call in October.

The controversy does not appear to have materially impacted Apollo’s fundraising efforts: the $18.4 billion in third-party capital it had raised by the end of Q3 2020 was already in line with its typical annual range of $15 billion and $20 billion. The firm will disclose Q4 2020 earnings on 3 February.