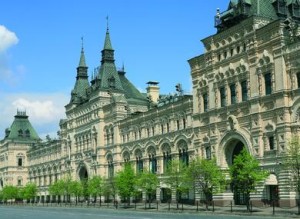 In a country where citizens still remember the Soviet era of ‘deficit’ retailers, the current explosion of high street shops and chains is something to behold. For the past four years in a row Russia has held first or second place in A.T. Kearney’s Emerging Markets Priorities for Global Retailers report which rates the attractiveness of emerging markets for global retailers. And private equity managers have wasted no time getting in on the action. EBRD has decided to invest US$125m into Lenta Hypermarkets – a major retail chain headquartered in St. Petersburg. The EC-backed private equity powerhouse is supporting the expansion of Lenta’s branded retail chain into the Russian regions outside Moscow. As part of the project the company will purchase land or usage rights for land, construction, equipment to launch several large-format food retail stores in the Russian regions operated under the Lenta brand.

Leading Moscow-based private equity player Barings Vostok Capital Partners teamed with Eagle Venture Partners to invest in Nezabudga regional retail chain and it is rumoured that they are now looking for an exit.

Carlyle Group, which has a history of opening and closing offices in Moscow, invested in drugstore chain Apteka Holdings, in August 1999 and has already made an exit.

The attractiveness of Russian retail coupled with growing appetite of PE firms for Russian assets leaves little doubt that significant deals will continue in this sector.

“The spirit of consumerism in a modern Russia is very high,” says Eugeni Boutman, CEO of ECS group, which represents Apple Computer in the CIS countries and owns a network of monobrand Apple stores called Re:Store. Russians tend to make emotional purchases even of quite expensive goods and with recently discovered credit cards and consumer loans, this habit is expected to persist and deepen. This encourages retailers, many of whom are working on high growth business plans. Currently the Re:Store network includes 21 shops and Boutman plans to double its stores and reach sales of US$100m this year.

Jones Lang LaSalle’s Russia Shopping Centre Market Report, in its detailed while a bit over-optimistic research (the word ‘risk’ is used only once in the 22-page document) the company appraised the total retail turnover in Russia in 2006 as US$300bn. Currently modern retail is responsible for only 15% to 25% of the Russian market. Even for the most developed Moscow region this figure is less than 50%, which creates a huge opportunity for development. Jones Lang LaSalle predicts 10% to 15% annual growth in turnover for Russian retailers through 2010. The growth of the Russian GDP for the same period is planned to be 5% to 6%. For the foreseeable future retail remains one of the main drivers of the Russian economy.

“We will see innovation from global retail networks, new formats for shops and rapid penetration of the modern retail to the regions outside Moscow,” Anton Poriadine, manager of Moscow office of A.T. Kearney predicts. Among the global players currently present in the country are Swedish home furnishing company IKEA; Auchan and Lerow Merlein of France; and the German Metro Group. Several “big shots” of the industry, including Wal-Mart, Tesco and Casino have already announced their interest in the country. This is not bad news for the local retail networks. For the last several years they developed their businesses bearing in mind the unavoidable competition from global players. They copied modern formats and hired western consultants and executives. And they did their homework well. Now the country has several market-consolidating retail networks, with effective management and turnover measured in billions of dollars including X5 group in the food sector; Eldorado and M.Video in electronics; and Sportmaster in sporting goods. They are ready to compete with any international network or to be sold for a fair price.

Obviously the scale is different but the story is the same on a regional level where local retail networks are preparing to compete or to be acquired by federal companies. Due to the big geographical and cultural diversity of Russia many local companies have very strong regional positions. One such example is DOMO from Kazan – a home appliances retailer with 118 shops. According to head of the company Anton Saifuddinov they have prepared to face competition with global and large Russian networks for the last two years. DOMO re-branded and changed the layout of its shops and entered smaller cities. It nearly doubled its turnover in 2006 to reach US$250m. In 2007, backed by Volga River Private Equity, they bought Moscow-based White Wind digital network. Saifuddinov plans for a possible partnership with a strategic investor or an IPO of DOMO in three to four years.

Nevertheless the general level of penetration of modern retail in the regions outside Moscow is still very low. So for the next two to three years retailers in the country will grow geographically. “Now I have obvious ways to invest in development,” says Boutman of ECS. “Enter the new regions, enter smaller cities. But after 2010 a level of saturation will be reached. Then the real competition will begin. To grow further one will have to buy.”

All the experts rated country risks for retail in Russia quite low. Apart from energy and natural resources many sectors available for investment in Russia are not affected by politics and retail is one of those. And unlike India and China, Russian legislation doesn’t limit foreign capital from investment into retail. The main risks of investing in retail lies in its diversity. Though generally attractive, Russian retail changes significantly from sector to sector and from region to region. The electronics market is dominated by organised retail networks, which leave little space for new players. There are no strong networks on apparel or children goods markets. However in sporting goods, Sportmaster holds a position close to a monopoly, with competition from this billion dollar monolith a newcomer will need to make significant investments.

Retail stories not only change from industry to industry but also region to region. While the level of penetration of modern retail through the country is about 25%, in St Petersburg this figure is close to 75%. Average stock per 1000 of population in Russia is 23 m2, European average is 175 m2 but in the city of Kazan this is 270 m2 – much higher than the European average.

Another risk factor is labour. Russia takes only 13th position in A.T. Kearney’s Retail Labour Index. According to Poriadine, this could mean possible difficulties in hiring the right personell or a risk of going into business with incompetent executives. “In the same region you may find a modern and well educated CEO in electronics retailing and a relict of Soviet era managing chain of food stores,” he warns.

“Next year I expect to see Vietnam and Ukraine come out ahead of Russia,” says Poriadine, who continues to analyse Global Retail Development Index. In the current report ‘time pressure’ for Russia is considered high as the market received 90 points out of a possible 100. This means that the window of opportunity for this market is closing. “Any niche – market or geographical – which is vacant now, will be filled by 2010,” predicts Boutman. The same year Saifuddinov plans an IPO for his company DOMO. Two-thirds of retailers in Russia are under significant development. So whichever decision an investor has to make concerning the Russian retail market – it had better make it fast.