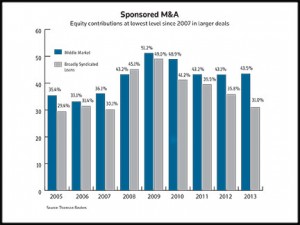 Tony James, president of Blackstone Group, said the giant buyout firm has been stymied by some of the competition for deals, which is being driven by easier access to leverage and robust credit markets.

“It is frustrating for our guys to keep going after things and keep getting outbid,” James said on a conference call on Jan. 30 to discuss the firm’s latest earnings report. “The thing that Steve (Schwarzman) and I have to do as managers is just make sure that that frustration doesn’t bubble over into people sort of overpaying on the one hand, or just getting discouraged and retreating on the other hand. We have to stay in the game…in a disciplined way.”

Equity contributions in deals involving broadly-syndicated loans – with loan sizes or revenue at the target company above $500 million – fell to an average 31 percent in 2013 from about 35.8 percent in 2012. That compares to the 30.1 percent recorded in the year prior to the collapse of Lehman Brothers, according to Thomson Financial data. Meanwhile, debt-to-EBITDA ratios in broadly-syndicated loans climbed to about 6.21x in 2013 from 5.86x in 2012, according to Thomson Reuters data. That compares to 7.05x in 2007.

The numbers were less dramatic for deals under $500 million in the middle market, where equity contributions rose slightly to 43.5 percent from 43.1 percent in 2013. Debt-to-EBITDA levels in that category edged up fractionally to 5.11x from 5.09x.

Among the deals that pushed the envelope on equity contributions, according to an analysis by Buyouts:

The lower equity levels mean sponsors have less money at risk in their deals, and the potential for big gains should everything work out as planned. The risk, of course, is that companies become over-leveraged to the point they can’t service their debt. There’s also the risk of overpaying.

“We’ve seen a number of deals where leverage goes up to 7x EBITDA, with buyers pushing minimum equity,” he said. “Plentiful leverage is driving purchase prices, so it’s important to be disciplined around valuation and the structure of deals. We don’t see the leverage as a great thing. We prefer environments where capital is a little more precious.”

More lax lending, such as covenant lite loans, make investments look attractive on paper, but in reality they may hold more risk. FFL prefers deals with leverage of about 2x EBITDA and in some cases, none, he said. FFL bought reverse mortgage firm American Advisors Group in December, 2012, with no leverage.

“Having principals here that have lived through many cycles—and we’ve all been through one recently—it’s important for us to keep our leverage low,” he said.

“Slow-growth, non-cyclical companies with strong cash flows are better able to support high levels of debt and are often purchased by funds using greater relative leverage as a way to maximize IRR,” he said in an email to Buyouts.

“In essence, with high-growth companies the (private equity) funds can make their money through increased operating performance, whereas with low-growth companies, the funds have to do more financial engineering.”

Gevurtz said his work on an investment in cloud service firm Telekenex by Spire Capital Partners fits into the higher-growth category. No financial terms of the deal announced on Jan. 27 were disclosed, but it included a controlling stake in Telekenex and a low amount of leverage.

“This company could feasibly take on more leverage since it has a monthly billing model and strong recurring revenue,” Gervurtz said. “But Spire is more focused on operational growth than financial engineering, so this was not a highly-leveraged deal.”

Some GPs said banks have been willing to provide more liquidity partly because loans are syndicated nowadays, spreading the risk around. Fear has receded in the face of bullish equity and debt markets.

“Since the 2009 crash, we’ve had four straight years of up equity markets, up leveraged markets, and people have forgotten that there may be risk on the horizon,” said Dipanjan “DJ” Deb, managing partner of Francisco Partners.

“We are basically back to 2006 and 2007 in terms of the credit markets. That doesn’t mean we think the markets will crash tomorrow. However, as people continue to take on more risk and bull markets persist, people have to remember that when things are this good, history tends to repeat itself.”

“If you are a scale recurring revenue business, there is almost no price that is too high,” he said.

But pockets of value remain in sub scale and non-software businesses, as well as orphan divisions in the tech sector, he said. The firm’s purchase of hospital automation company Aesynt from McKesson Corp in November, and its acquisition of NexTech in October marked two deals with ”very attractive prices,” Deb said.

Phil Canfield, managing director of GTCR, said he’s seeing companies with slow growth selling for 7x EBITDA and equity of less than 20 percent, but higher-growth firms have equity payments of 50 percent or more.

GTCR focuses more on operating cash flow multiples than EBITDA when it weighs how much it’ll pay for a target.

“The dispersion of the equity component of the purchase price has increased a lot in the last year,” he said. “Depending on how we think about growth – we have no problem using a fair amount of leverage. In almost all of our companies—part of our leaders strategy is to use acquisitions to accelerate growth – we’ll leave slack in the capital structure, not because we think the business cannot handle the leverage, but because we want to have capacity to do follow-on acquisitions.”

Blackstone Group’s James said a combination of robust credit, the lofty equities market and the return of some strategics has ratcheted up demand for companies, while the deal supply isn’t that high. But James is not concerned that high prices and debt levels are signaling danger in the buyout market.

“I think it would be premature to conclude that those deals were unwise,” he said. “We maybe couldn’t get there looking at the cards in our hand on some of those prices, but that doesn’t mean by any means that they made a mistake.”

(This story was updated to include information about the American Advisors Group transaction. Also, an earlier version of this story contained an incorrect name for FFL and an incorrect spelling for Brad Gevurtz of D.A. Davidson.)