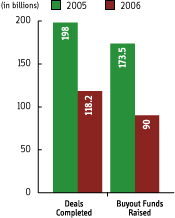 Coming off of the Q2 close, buyout shops have been quick to put an additional $8.21 billion to work. The largest deal to close since Buyouts last went to press was Intelsat’s $6.4 billion add-on of PanAmSat. That deal, which includes the assumption of debt, is likely among the largest add-ons in private equity’s history.

, Apollo Management, Madison Dearborn Partners and Permira Advisers are Intelsat’s backers. Also putting a 10-figure deal to bed was Texas Pacific Group, which acquired Altivity Packaging for $1.04 billion. Including other recently-completed transactions, the year-to-date deal volume now stands at an astounding $118.21 billion. At this time last year, buyout pros had only put $78.3 billion to work.

On the fundraising side, private equity firms logged a momentus two weeks, as The Blackstone Group set a new fundraising record, corralling $15.6 billion for its fifth fund. The total for the year in buyout and mezzanine funds raised is now $90 billion.