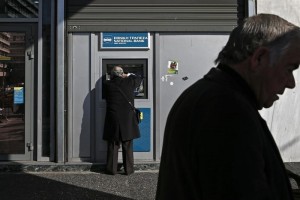 The two private equity funds signed an agreement last week and a formal announcement will be issued soon, said the sources, who declined to be named as the transaction was not yet public.

Sources had told Reuters in November that Baring was in advanced talks to buy Blackstone’s stake in CMS.

One of the sources said Blackstone had paid a total of $65 million to build its majority stake in CMS Info Systems from then owner CMS Computers in 2009 in two separate deals.

CMS provides ATM-related cash management services, including cash delivery and pick-ups and in-transit services, according to its website.

“A definitive agreement has been signed and a formal announcement will follow shortly,” said one of the sources.

Baring’s investment in CMS comes amid an expected surge in ATM-related services as India is in the midst of expanding the access of banking services in the country.

The ATM sector has also benefitted after the central bank in 2012 allowed firms other than lenders to operate the machines.

The transaction marks Blackstone’s highest return since setting up the U.S. private equity fund set its India office in 2005, according to Thomson Reuters calculations.