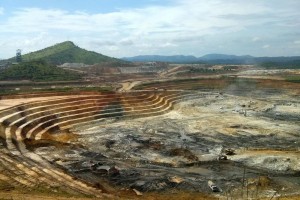 Lloyd Pengilly, the head of mining fund QKR Corp, which in October bought the Navachab Gold mine in Namibia from AngloGold, has said gold remains his preferred sector for acquisitions.

Mining companies are warming up to the interest from funds and private equity too. A survey of 50 leading individuals from the mining industry carried out by law firm Berwin Leighton Paisner (BLP) last month, showed 94 percent of respondents are open to a private equity investment or disposal to a private equity funds in the next 12 months.

“What is interesting is that the companies are open to investment by private equity and nearly a half of these are looking for the expertise as well as the money a private equity investment can bring,” said Alexander Keepin a partner and co-head of mining at BLP.

Most gold companies failed to cash in on rising gold prices in the decade to 2011, overspending instead on costly growth projects and loading up with debt.

The perception that they mismanaged their businesses in the good times has scared away investors after a steep bullion price slump in 2012 and 2013. It has pushed company valuations far below their peers in other commodities such as base metals.

Gold producers are now being forced to shape up to stay afloat and their focus has switched to cutting costs and cleaning up their finances.

Selling non-core mines, and doing it quickly, will be key for many to ensure their survival. And given the large number of forced sellers, valuations are starting to look tempting.

“I think it’s a buyers’ market at the moment so conceivably you will see some of the assets come out at a discount,” said BMO Capital Markets analyst Andrew Breichmanis.

After a botched attempt last year to split the company into two and raise capital, South Africa’s AngloGold Ashanti has outlined a plan to sell assets and pay back debt, for example.

Cash-starved smaller companies or explorers might have to take more drastic decisions especially as traditional sources of funding dry up.

“It is pretty hard for a lot of juniors to raise capital so they either go out of existence or they need to do things like joint ventures, acquisitions, putting themselves up for sale,” said Rajat Kohli, Standard Bank’s global head of mining.

Unlike prices for most other commodities, the gold price does not hinge largely on demand and supply fundamentals. Instead, it is tied more to global economic factors such as interest rates and inflation and is more sensitive to investor sentiment, which make its moves harder to predict.

John Biccard, portfolio manager for the Investec Value Fund, said also due to uncertainties over prices, bullion producers were near historic lows based on various valuations such as price to book, a ratio comparing a stock’s market value to its book or asset value.

“If you look at the price to book and enterprise value to revenue, they are at 30 to 40-year lows and are close to where they were at in 2000,” he told Reuters.

There are already signs of bargain hunting.

Unlisted Chinese asset manager Heaven-Sent, for example, has offered to buy junior South African gold producer Village Main Reef in a deal that values the target at 637 million rand ($56 million). The offer is for 12.25 rand per share, compared to its life high of 72 rand.

The head of bullion producer Gold Fields has said he would be willing to spend $300-$500 million on acquiring operating mines.

The head of Sibanye, a spin-off of Gold Fields, has called for consolidation in South Africa’s gold sector and Africa-focused Randgold is also on the lookout for a deal.

(By Ed Stoddard and Silvia Antonioli; Additional reporting by Tiisetso Motsoeneng in Johannesburg and Francesco Canepa in London; Editing by Keith Weir)