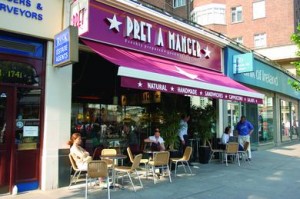 Investment bank Morgan Stanley’s private equity unit and are in the process of tabling separate bids for , the London-headquartered sandwich chain.

It is reported that Advent and are set to launch separate bids of between £300m and £350m, and although this is significantly below the £450m that was expected towards the end of last year, it is well above initial figures.

Pret a Manger hired investment bank NM last June to advise on strategy after its April announcement of plans to float had triggered several approaches. Then, turnover of £200m suggested a similar price tag.

Advent and Morgan Stanley are the only names directly linked to the auction, but European buyout firm Bridgepoint was confirmed as being involved in the sale process late last year.

At the time of Rothschild’s appointment, potential trade buyers included McDonalds, which bought a 33% stake in Pret in 2001 for £50m, Costa Coffee, Starbucks and Marks and Spencer.

Other financial buyers now believed to have pulled out of the running include London-based Lion Capital, Icelandic investor Kaupthing and PPM Capital, the private equity arm of UK insurer Prudential that is currently in the process of spinning out from its parent group.

In December the withdrawal of various bidders was thought to have put the auction in the balance, not helped by Pret founders Sinclair Beecham and Julian Metcalfe suggesting that they would not reinvest in the business, a clear concern for private equity buyers, which put a huge premium on experienced management.