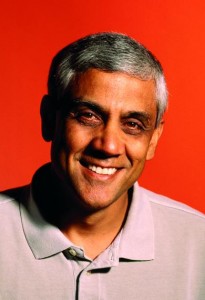 Khosla grew up dreaming of being an entrepreneur, despite growing up in an Indian Army household with no business or technology connections. Since age 16, when he first heard about Intel starting up, he dreamt of starting his own technology company. He was one of the three founders of Daisy Systems, which was the first significant computer aided design system for electrical engineers. The company went on to significant revenue, profits and an IPO. In 1986 he switched sides and joined Kleiner Perkins where he was and continues to be a general partner of KPCB funds through KP X.

In 2004, Khosla, driven by the need for flexibility to accommodate four teenage children and a desire to be more experimental, to fund sometimes imprudent “science experiments”, and to take on both “for profit” and for “social impact” ventures, formed khoslaventures, funded entirely with family funds. His goals remain the same – work and learn from fun and knowledgeable entrepreneurs, build impactful companies through the leverage of innovation, and spend time as a partnership making a difference. He has a passion for nascent technologies that can have a beneficial effect and economic impact on society.

His current passion is Social Entrepreneurship with a special emphasis on microfinance as a poverty alleviation tool. He is a supporter of many microfinance organisations in India and Africa. He has been experimenting with global housing. Vinod is also passionate about alternative energy, petroleum independence, and the environment.

Most venture capitalists like to say they are ready to roll 24 hours a day, seven days a week. While some just say that, Jennifer Fonstad – who once closed a deal while she was in a hospital delivery room waiting to give birth to her daughter – proves she really means it. “I definitely focus on being a 24/7 VC. That is definitely part of the game and it is also a lot of fun,” Fonstad says. At Draper Fisher Jurvetson, her investments span a broad set of both technology and life sciences companies including cleantech. One of the firm’s investments that she has led includes GreenFuel Technologies, which reduces greenhouse-gas emissions at power plants and produces biofuels at the same time. GreenFuel takes carbon dioxide produced by a power plant and feeds it to algae, which are then converted into biofuel. Before becoming a champion of a particular entrepreneur, Fonstad considers a number of factors in evaluating a potential investment opportunity, such as whether the company has a strong technical team with clear breakout capability, experience and a real passion for re-inventing the world. “This means we are making bets on people first and foremost and we are making bets on our judgment about market spaces that are emerging,” she says.

There are not a lot of successful cleantech entrepreneurs for venture firms to draw from, but Advanced Technology Ventures was lucky to get one of them. Todd Kimmel, 32, founded Coskata, a biofuel processing company, and helped get it off the ground as COO for two years. The Warrenville, Illinois-based company recently came out of stealth and raised a US$10m investment round from ATV and other investors. Things were going well at Coskata, but Kimmel yearned for the early stage experience. “I’m not an operator,” he says. Before he moved from co-founder to investor earlier this year, Kimmel had spent time at Advanced Technology Ventures in 2003, when he helped source the firm’s investments in cleantech deals such as Great Point Energy, CaliSolar and Sub-One Technology. Before going green, Kimmel founded Innovance, a Canadian optical networking provider, and later worked as its vice-president of business development. He still peppers his comments on cleantech with comparisons to networking. The most obvious similarity? Cleantech won’t be able to make big leaps until competitors start to agree on common protocols. He also says that advancements in cleantech may come down to how willing the government is to help, and he’s quick to point to renewable energy credits in Japan and Germany at spurring the solar panel market.

Jason Matlof is, like most cleantech investors, a transplant. Matlof rode the 1990s networking boom working for Cisco Systems and at security-focused networking firm Neoteris. A series of acquisitions carried him from one security networking company to another until he wanted to do something new, be a part of another boom. “By the time I got to 2004 I looked around and saw that there was very little technical innovation left to do out there,” he says. He looked at cleantech companies and applied for jobs, but found that nobody wanted to hire a 38-year-old executive without deep sector experience. Venture investing provided an alternative path to wealth. “It was an opportunistic way to get into renewable energy,” he says. “As an investor, you don’t need to be as deep, you have to be curious, have general business skills and a record of entrepreneurship.” He joined Battery in 2005 and has sourced such deals as SmartSpark Energy, Advent Solar and biofuels company SunEthanol. Matlof says the US Government can help influence positive outcomes for nascent clean technologies. “There needs to be a short-term pricing umbrella that would protect these start-ups as they come into the market,” Matlof says.

Steve Westly witnessed his first big moment in cleantech history during the US oil embargo of the late 1970s when President Carter installed solar panels on the roof of the White House. A few years later – with long lines at the gas pump a fading memory – President Reagan pried off the panels. With that gesture, says Westly, a former Carter Administration energy department staffer, “We went back to 20 years of dependence on foreign oil.” In the interim, Westly went on to other things, including a post as vice-president of marketing on eBay’s founding executive team, a four-year term as California’s State Controller, and a run for the state’s Democratic gubernatorial nomination. He also squeezed in a stint with the California Public Utilities Commission, during which time he wrote two books on alternative energy. Today, the 51-year-old San Francisco Bay Area native has circled back to cleantech. Last year, he formed The Westly Group, a late stage cleantech venture firm that has backed Tesla Motors, among others. The Westly Group is located in the back office of Kleiner Perkins Caufield & Byers in Menlo Park, California. Westly is now rumoured to be one of the early candidates to run for State Governor again in 2010. Currently, he is co-chairman of Barack Obama’s 2008 presidential campaign in California.

Sometimes, it makes sense to go where other people aren’t. That’s how general partner Kef Kasdin got into cleantech when she joined Battelle Ventures. The 45-year-old had held various positions at 3Com Corp. After the Internet bubble burst, she joined Battelle, which spins out technologies from national labs run by the Battelle Corp. However, there was little at Battelle that was related to the telecommunications industry.

So she began looking at energy. She has since led the firm in looking at fuel cells, including Powerzyme, a developer of fuel cells for laptops. Kasdin has also helped spin out Ampulse, a thin-film solar company from the US Department of Energy’s Oak Ridge National Laboratory. And she led the firm to invest in traffic management company Aldis, which replaces incandescent bulbs in traffic lights with light-emitting diodes. Currently, she’s a board observer on ImageTree, an investment she shares with Battelle Ventures General Partner Mort Collins. The company has developed a way to keep track of the assets of forests. Eventually, the company may play a role in providing monitoring for the carbon offset market. “If you’re going to use forests to collect carbon credits, you need to track that,” she says.

When Alex Sloan was 24, he wanted to find a way to get back to Vietnam. Sloan had studied the country and travelled extensively there as a college student in the late 1980s and was impressed with the country’s potential for rapid economic expansion. So he helped launch a US$55m fund called The Vietnam Fund Limited and he was the only American in a partnership of mainly UK investors. “Every deal was the first of its kind and we had to get government approval because it was a new structure,” he says. Sloan, later partnered with Charlie Walker, a buddy from Hambrecht and Quist’s venture capital division, to raise a US$100m venture fund to address an emerging early stage opportunity that evolved into cleantech. The two never managed to get the fund raised, however. Large pension funds had yet to recognise cleantech as an asset class. Sloan then joined Expansion Capital Partners as a principal in 2006 and has focused on technologies that can reduce the demand for scarce resources such as energy. Sloan, now 39, concedes that his investments may lack some of the sex-appeal of exciting new energy production technologies, but he says that they are more likely to change the environmental equation. “We believe in revolutionary outcomes through incremental improvements,” he says.