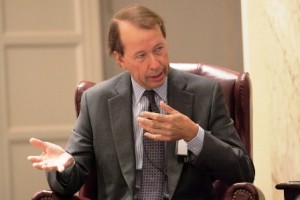 Blackstone Capital Partners VII stands at $16.7 billion of commitments, including $961 million raised in July, the firm said in its second-quarter update.

The firm said it received third-party subscriptions “well in excess” of the $17.5 billion cap. A total of 81 investors have committed more than $100 million.

“We could have done more than the whole fund in the first closing,” Blackstone COO and President Tony James said on a call with reporters. “We had to cut back [some LP allocations] to leave room for some investors.”

James said the firm expected the fundraising effort to last about a year, but it’s coming in closer to about four months. He didn’t mention any plans to raise the hard cap for Fund VII despite the demand. But the firm could possibly come back to market for Fund VIII more quickly to meet LP interest, if it deploys the Fund VII quickly.

“We feel we should be disciplined,” James said in response to a question from Buyouts. “If we could invest it fast, we’ll be back sooner.”

James said sticking to the fund size amounts to good marketing for the firm’s growing base of institutional and retail investors. “LPs love the discipline,” he said.

The firm took in $31 billion in new capital in Q2, bringing total dry powder up to $82 billion.

Blackstone said it has plenty of opportunities for investments across its private equity, real estate, hedge fund, credit and secondary platforms.

“We would never take in more money that we thought we could deploy,” James said.

Blackstone said it plans to continue deploying capital at a rate of about $20 billion a year. It put roughly $5 billion to work during the quarter, including investments in Europe and the energy sector.

During the quarter, Blackstone completed the strategic sale of Biomet, and sold public equities from Hilton, Nielsen, Catalent and Pinnacle Foods.

The firm’s total assets under management increased 19 percent to $333 billion, up from about $279 billion in the year-ago period.