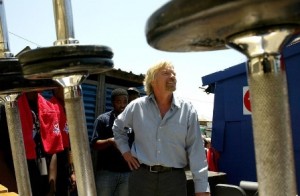 The fitness chain, jointly owned by the Virgin Group of entrepreneur Richard Branson and buyout firm CVC Capital Partners, has 267 gyms across nine countries including South Africa, home to the largest number of Virgin Active clubs, Thailand and Britain.

With an internal rate of return – a measure how long it takes to earn a return on an investment – in the high 20s, CVC Capital Partners would double its money on the deal, a source familiar with the matter said.

CVC Capital bought a 51 percent stake in Virgin Active about three years ago and the source said it had invested 25 million pounds ($37 million) in new clubs since then.

Drawn by the prospect of outsize returns, private equity firms are increasingly flocking to lock in customers on the African continent of 1 billion people.

African-focused funds run by firms such as Carlyle Group LP and Amethis are behind the expansion in African private equity deals. These totaled $8.1 billion in 2014, the second highest on record in Africa, according to African Private Equity Association.

Brait said the deal would allow it to expand Virgin Active further into Africa and Asia, where the middle class is increasingly concerned about its health as lifestyle diseases such as diabetes become more common.

South Africa ranks third in a list of the world’s most obese nations behind the United States and Mexico.

But many in South Africa are aiming to keep healthy.

“I go to the gym at least three times a week, I like to keep fit, keep the weight and diseases away and the good thing is the gym is very close to where I work,” said Archie Ayekpa, a 28-year civil servant and Virgin Active customer in Pretoria.

Brait said it would fund the deal with cash on hand.