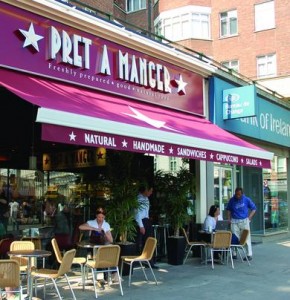 Bridgepoint has picked up from the founders and US fast food giant for an estimated £345m (€455.6m). , which advised on the transaction, has also taken a minority stake in the sandwich retailer. The founders will also be “significantly reinvesting” in the business but McDonalds will exit completely.

Pret, founded by Sinclair Beecham and Jeremy Metcalfe in 1986, currently has 200 shops. Most are in the UK, with some in the US and Hong Kong. Last year, sales rose by 14.9% to £223m, implying that each shop produces £1.12m of turnover annually. Bridgepoint wants to expand the operation, particularly overseas, with plans to open seven outlets in New York this year out of a total of 30 new shops. Going forward, it hopes to expand by 15% annually.

The price that is estimated to have been paid is roughly a third less than the £445m first suggested when the chain was put up for sale last April. Back then, a flotation was considered before Rothschild was appointed in June to consider options. However, insiders said that Pret trading remains strong. Bridgepoint had wanted to buy the business in 2002 soon after the founders sold a 33% stake to McDonalds for £50m.

Guy Weldon, a Bridgepoint partner, said: “Pret A Manger is a unique business with many USPs that position it well to capitalise on food and consumer lifestyle changes driven by the trend for premium healthy eating.”

Reports have suggested that the management team will be left with a stake of around 20% in the business. One incentive to complete the deal was the impending change to the UK capital gains tax regime, which will see the rate effectively rise from 10% to 18% for entrepreneurial owners of private businesses.

Alongside Rothschild as financial adviser, Macfarlanes acted as lawyer to Pret. SJ Berwin advised the management and Reed Smith Richards Butler acted for McDonald’s. The debt was underwritten by Rabobank.

Pret chairman Larry Billet, a former Salomon banker, was also instrumental in the sales process. Bridgepoint beat competition from FL Group initially and then Advent International and Morgan Stanley in the final round.