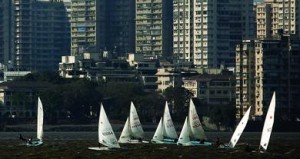 India’s economy, for several years one of the most remarkable success stories of the 21st century, has remained cheerfully untroubled by the global financial turbulence – if you discount falls in the country’s stock market, which mirror those of most indices worldwide.

When you contrast this performance with corresponding Western European and US figures, the difference is stark. What has happened is that many Western private equity funds have shifted their focus to India and China, in response to tighter credit conditions in their domestic markets. Candover, for example, has just opened a Hong Kong office to act as a base for Chinese and Indian investments. Some commentators believe that the number of private equity funds operating in India is now as much as 20% higher than in mid-2007, leading to greater competition for assets and rising valuations.

A perception of the Indian market as ‘frothy’ holds for valuations in the public markets, according to Sanjay Arte at India Value Fund, but not for the private sector. “Those private equity funds that invested in the public markets are all under water now,” he says. Investments known as PIPE (Private Equity Investments in Public Enterprises), have been badly hit by the global downturn, but, as Arte puts it, “where funds have invested in mid-market unlisted companies, as long as there is growth in the company, they have been much less affected.”

Differences also emerge according to sector. Agricultural-based companies have seen growth of just 3% to 4%, whereas industrial companies have registered 9% to 10% and services 11% to 12%. Then there are specific sub sectors where growth has been as much as 40%. “For example, ready mixed concrete,” says Arte. “There is very low penetration and a lot of growth. For the coming year, growth may be 25%.”

Economists predict that overall GDP growth in India will be between 7.5% and 8% in 2009, a slight drop on the 8.5% to 9% that the country has experienced in recent years, but still far in excess of likely European and US rates. “We are a fairly insulated economy, without many exports and not so closely linked to the global economy,” says Arte. “You have to be realistic and say that growth will be less in 2009 but rather than exiting companies, private equity funds will probably hold assets for longer. There’s no reason to sell early,” he argues.

IT services and outsourcing deals, one of the major contributors to India’s recent increased prosperity, are still in high demand, according to Gulpreet Kohli at Chryscapital in New Delhi. His company made three sizeable investments in the summer of 2008, with targets including an IT services company. “The outsourcing sector might see a bit of a slowdown,” he admits, “but companies like IBM and Accenture are still expanding strongly.” Chryscapital also invested recently in an automotive parts company and a construction firm, but is holding fire in anticipation of better deals to come. “We’re pacing ourselves and waiting for values to fall further,” says Kohli.

Foreign direct investment has remained relatively strong in India, with some notable deals. Japanese drug firm Daiichi Sankyo paid around US$4.6bn for 50.1% of the voting rights in India’s largest pharmaceutical company Ranbaxy Laboratories in June 2008 – a deal which broke new ground for both Japanese and Indian companies. Until recently, Japanese pharmaceutical companies had made few external acquisitions. Equally, large family-run groups like Ranbaxy have seldom been put up for sale, especially to a non-Indian purchaser. “It is traditionally seen as bad form for a family to sell something that they’ve created,” Sanjay Arte at India Value Fund points out. “It’s like selling the crown jewels. But the fact that they’ve done it is a good thing for the market. It shows that there is a greater acceptance of transactions among family companies. There is significantly more openness than before.”

Other sectors where Arte expects to see consolidation and M&A activity include aviation, where the two largest publicly traded carriers, Jet Airways and Kingfisher, agreed to a cost-saving alliance in October 2008, as passenger numbers fell and their expenses rose. Many travellers in India have returned to train transport, as prices for flights became unaffordable.

Real estate has also been affected, along with infrastructure funds, who saw a 40% drop in their holdings between June 2007 and June 2008, according to a study conducted by SMC Investment Solutions & Services. Despite this loss, some remain optimistic about the prospects for private equity infrastructure investments. “The country is still well positioned to grow at over 7% in the long term, resulting in higher demand for electricity, airports, ports and roads,” says Karthikeyan Ranganathan, head of investments at Baring Private Equity Partners India. “In sectors like power, where there is a huge deficit, we can expect a lot of investment.”