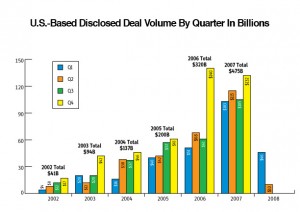 With credit markets showing few signs of a revival, and nothing but dried river beds where cash once flowed freely, buyout firms have struggled to complete any deal, much less the large-scale take-privates that dominated the landscape in 2006 and 2007. For those deals that do get done, buyout firms have had to contend with purchase prices that haven’t fallen nearly as fast as leverage multiples. It is a circumstance that foretells lower returns in the months ahead.

LBO firms based in the United States closed 185 control-stake deals in Q2 2008, well short of the 302 completed in Q2 2007 (an all-time record) or the 248 closed during the same period of 2006, according to Buyouts and its publisher Thomson Reuters. The drop-off in disclosed dollar volume is even starker: The 36 deals with disclosed values added up to a mere $10.1 billion in the second quarter, down from $115.0 billion a year before. The last time U.S.-based firms piled up such small numbers was the second quarter of 2002, when the industry racked up $8 billion in disclosed deal volume (see chart).

A year ago, six mega-deals alone accounted for more than half of disclosed volume in the second quarter. Deals of that size have been no-shows so far this year. Consider that the biggest completed deal of Q2 2008 was ’s $1.3 billion take-private of child-care provider Bright Horizons Family Solutions Inc. A year ago, by contrast, the biggest deal was the $27.5 billion delisting of pipeline operator Kinder Morgan by and .

Other statistics from Thomson Reuters suggest the market may have turned a corner, at least temporarily. The number of control-stake deals announced in the last quarter (some of which closed, some of which remain pending) ticked up about 25 percent from the previous quarter, rising from 163 to 211. Disclosed deal volume measured this way also grew quarter-to-quarter, from $15.6 billion to $20.9 billion. Also encouraging, buyout firms announced a handful of billion-dollar-plus deals that had underwriter tails wagging, including Carlyle Group’s pending $2.5 billion purchase of the government consulting business of Booz Allen Hamilton.

For buyout shops, the big drop-off in deal pace has meant sitting on an enormous pile of dry powder, while trying to find creative ways to deploy it. Indeed, more and more deals look not like traditional leveraged buyouts but like growth-equity deals, private placements in public companies and other forms of minority-stake investing. Through mid-June 2008, U.S.-based firms had plowed $14.4 billion into minority-stake deals (based on deals with disclosed valuations), compared with $20.9 billion for all of 2007 and $17.3 billion in 2006, according to Thomson Reuters. Still other firms have sought deal flow overseas, where the radioactivity of the U.S. mortgage meltdown hasn’t been as pronounced. For institutional investors, the slowdown in deals, both acquisitions and exits, has meant fewer distributions, which eventually could lead to fewer new commitments. For investment banks and other service providers the slowdown means less work and no end to the layoffs that have taken place across the industry in 2008.

Small deals dominated the charts in the second quarter, as the pullback in the debt markets limited the size of deals that could get done and forced sponsors to contribute more equity. Meantime, leverage multiples have started to come down in 2008, limiting the ability of firms to generate returns from credit alone. Average debt-to-EBITDA multiples for LBOs in the first half of 2008 came in at 3.5x for senior debt and 4.5x all in. As a result, sponsors have had to kick in more equity into deals to make up for gaps in financing, further dampening the potential for returns. The largest deals require as much as 50 percent equity from sponsors, up from the 33 percent or 40 percent—or as low as 25 percent—that was common during the last cycle.

Despite the doom and gloom, sources told us that companies worthy of acquisition have been coming to market. Making acquisitions work, however, typically requires a favorable mixture of factors. The target should be a recession-proof company; the sponsor should be willing to assume greater risk, in the form of more equity, more restrictive covenants and willingness to play a greater role in lining up debt financing; and the sponsor should be a known quantity to earn trust from more cautious lenders.

In other words, sponsors must provide certainty of close, both to nervous sellers and to skittish debt providers. Take the example of , the Milwaukee-based mid-market shop. The firm so far in 2008 has closed on two companies that can serve as platforms for add-on acquisitions, and has a third such deal nearly complete. To get one of its most recent deals done, to buy packaging company Coating Excellence International at the tail end of the first quarter, the buyout firm assembled a club of lenders, which agreed to provide a modest amount of leverage—about 4x EBITDA. In turn, each of the lenders—regional commercial banks such as M&I Bank and U.S. Bank—submitted a commitment letter to the seller, according to Tom Smith, a senior managing director. Previously, a commitment letter from the sponsor would likely have sufficed. Coating Excellence generates about $150 million in revenue annually, and it’s diversified product line should insulate it from economic volatility, Smith said.

“We do deals in sectors that lenders can see will be solid through cycles, and we use modest leverage,” said Kevin Kenealy, a Mason Wells managing director.

Some buyout firms have been going so far as to close deals without long-term financing lined up. Media-focused shop , for instance, relied entirely on equity and its own bridge financing to close a $150 million deal on June 30 for Brand Connections, which provides alternative out-of-home advertising—billboards next to ski lifts, for instance. The company’s advertising “sends messages to consumers when they’re most receptive—when they’re on vacation,” said Chris Russell, a managing director for Veronis Suhler Stevenson, which has closed three platform deals so far in 2008.

Brand Connections had been notching 30 percent annual growth rates, which ensured plenty of buyer interest and no credit-crunch discount. By eliminating the financing contingency, Veronis Suhler Stevenson offered certainty of close for the seller that other auction participants couldn’t match. Before closing the deal, the firm began lining up third-party financing. It should have little difficulty reducing its equity exposure, Russell said.

Indeed, the market is proving that a well-priced deal for a solid company can still generate interest from lenders. A $585 million term loan B backing Carlyle Group’s deal for Booz Allen Hamilton has produced a flood of institutional investors interested in taking a piece of the credit. The term loan has a LIBOR floor, guaranteeing a solid interest rate, and it’s being sold at a discount to par, which increases the yield. What’s more, Carlyle Group is contributing about 50 percent equity to the deal, and the company has a strong track record of generating cash.

Add those ingredients together, and it’s a potent mix. So potent, in fact, that the credit was oversubscribed by institutional buyers. That allowed the lead underwriters Lehman Brothers and Credit Suisse to push down the spread above LIBOR by 25 basis points; the discount to par was similarly narrowed from 97 cents on the dollar to 97.5 cents. Both will give Carlyle Group more favorable terms.

If nothing else, the Booz Allen deal and others like it prove it’s possible to construct a transaction that will attract lenders. But they also demonstrate that terms of deal-making have changed—less debt, more equity—and that caution still reigns.