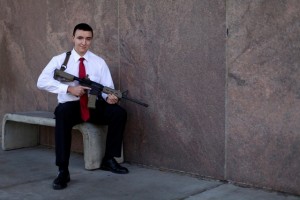 Treasurer John Chiang said he was frustrated that the manufacturer of the assault weapon used in the 2012 killing of 20 children and seven adults at Sandy Hook Elementary School in Connecticut was still indirectly financed by the California State Teachers’ Retirement System.

Chiang asked that Cerberus’ leadership attend CalSTRS’ Investment Committee meeting on Friday “to explain why the Freedom Group remains in its portfolio.”

CalSTRS said in a statement on Wednesday that “the patience of our membership wears thin,” but “contractual obligations and legal constraints severely limit our options to exit this investment.”

The pension fund does not want to sell about $375 million worth of two Cerberus funds at a loss without exhausting alternatives, the fund said. Disclosing the specific value of indirect holdings, such as Freedom Group, would violate the fund’s private equity agreements.

Chiang was initially pleased when Cerberus issued a statement in late 2012 noting its intent to sell its investment holdings in the Freedom Group.

“We rightly determined that there is significant risk in investing in the Freedom Group, a business that manufactures weapons that are susceptible to sanctions, regulations, and actions that could be detrimental to the fund,” Chiang wrote.

But more than two years later, Cerberus still has holdings in the assault weapon manufacturer, an investment that Chiang considers counter to the beliefs of CalSTRS and its 879,329 members and beneficiaries. CalSTRS is the country’s second largest pension fund with a portfolio valued at $190.8 billion.

In April 2013, CalSTRS Board agreed to divest $3 million in public equity shares in Smith & Wesson and Sturm Ruger & Co Inc.

Chiang’s sentiments were echoed by some families who lost children or family members in the Sandy Hook tragedy, who urged Cerberus to re-examine its ownership of a company whose product murdered “20 children and 6 educators in 264 seconds.”

At the meeting later this week, Chiang expects to have “a clearer picture” of when Cerberus will “deliver on its promise and remove the Freedom Group from its portfolio.”

The move by Chiang follows CalSTRS’ decision in January to require an opt-out provision for private equity investments in firearms manufacturers that make assault rifles that are illegal in the state, as Buyouts previously reported.

CalSTRS spokesman Ricardo Duran previously told Buyouts via email that the pension system introduced “provisions in all new private equity partnership agreements that prevent partners from making such investments (in manufacturers that make firearms banned in California), or offer CalSTRS an opt-out option if such investments occur.”