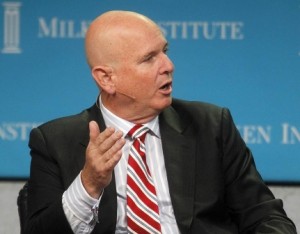 The California State Teachers’ Retirement System is bracing for hard choices as it readies its private equity portfolio for the top of the fundraising cycle, according to an investment plan released by the retirement system in advance of its July 9 meeting.

“With much of the industry in high-harvest mode, managers are fundraising on a more frequent basis,” states the investment plan. “To ‘invest through the cycles’ staff must remain disciplined and make hard choices to avoid being swept along by the increasing momentum of the fundraising cycle.”

Private equity’s share of CalSTRS overall investment portfolio fell from 11.5 percent as of mid-2014 to just 9.7 percent by the end of May, according to its website. The decline was fueled by a surge in private equity distributions, which outpaced new capital calls, as well as soaring valuations within the retirement system’s public equity portfolio. This caused a denominator effect: The overall size of the investment fund grew, driven by big gains in public equities, causing the percentage of the fund allocated to private equity to fall.

“Overall fund allocation models will have to be adjusted accordingly,” the investment plan states. “Predicting private equity investment cycles is difficult at best and often counter-productive.”

Even as it prepares for the top of the market, CalSTRS’ recent activity does not suggest a slower commitment pace. The retirement system committed a little less than $3.4 billion to private equity in the 12-month period ended March 31, a 20 percent increase from the $2.85 billion it committed during the same period a year earlier, according to pension documents.

Moving from the mainstream

Even with difficult decisions about its private equity portfolio on the hortizon, CalSTRS will continue to expand the scope of its portfolio by allocating to funds with “less-mainstream” strategies, including emerging markets, energy and debt-related vehicles, according to the investment plan.

CalSTRS allocated $400 million to energy and debt-related funds in the first quarter, committing $200 million each to EnCap Energy Capital Fund X and Fortress’ FCO MA IV, according to pension documents.

Debt-related strategies accounted for roughly $2.6 billion of the retirement system’s private equity portfolio market value. The portfolio’s exposure to energy and emerging markets funds could not be determined as of press time.

CalSTRS also plans to spend the next year promoting “compliance, transparency and fairness” in its relationships with private equity general partners, and to also boost its information systems to better track data at the portfolio company level.

The pension’s investment plan praises Dodd-Frank and the SEC, noting provisions of the legislation pertaining to private equity “are a positive development in the industry and the SEC’s efforts to provide increased oversight is also positive.”

The SEC has levied enforcement actions against several private equity firms over the last year and half, including a recent $30 million settlement with Kohlberg Kravis Roberts for misallocating broken-deal expenses. CalSTRS has committed more than $500 million to KKR since 2006, according to pension documents.

Is not clear how CalSTRS plans to track portfolio company data, or what efforts are underway to promote compliance. A CalSTRS spokesman declined to comment.