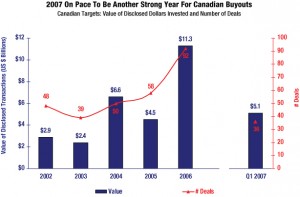 The Canadian buyout market, though still modest compared to the size of its southern neighbor, is growing at breakneck speed, according to new report by the Canadian Venture Capital & Private Equity Association. The pace of fundraising, however, is cooling off after an anomalous spike in 2006.

“We’re roughly on pace to double last year’s record performance, which more than doubled the prior year’s performance,” CVCA President Rick Nathan said at a May 15 press conference announcing the numbers. “So clearly the buyout market continues to accelerate.” That said, Canada’s LBO market remains small. According to the CVCA report, which relied on data from Thomson Financial (publisher of Buyouts), the United States was host to about $122 billion in deals in Q1 2007, which would extrapolate to nearly $500 billion for the full year.

“It’s kind of interesting to see that while we’re growing as fast as we possibly can, that we are not keeping pace with growth elsewhere,” said Nathan, who is also a managing director at Toronto, Ontario-based fund-of-funds . In part, Nathan said, that’s due to the absence of multibillion-dollar deals in Canada—those on par with the LBOs of Equity Office Properties Trust ($39 billion) or HCA Corp. ($33 billion). This year might well see the first truly blockbuster deal in Canada, as buyout firms are reportedly teaming up to compete for Bell Canada’s parent BCE in a transaction that could be valued as high as $45 billion.

Nearly half of the money invested in Canadian LBO targets during Q1 came from U.S.-domiciled firms, according to the report. Most of the remainder came from Canadian firms, with a small fraction coming from other international firms. If that breakdown remains consistent for the rest of the year, it would represent a significant departure from 2006, when relatively equal streams of capital came from investors from Canada, the United States and the rest of the world. But it would mark a return to the norm, since buyouts of Canadian targets by international sponsors were virtually nonexistent before 2006.

Meanwhile, things don’t look that bright on the fundraising front in Canada this year. According to the report, Canadian buyout shops locked in $7.9 billion in limited partner commitments in 2006, soaring from $1.4 billion in 2005 and $956 million in 2004. But the Q1 2007 Canadian fundraising tally came in at only $261 million, suggesting a return to pre-2006 levels. Fundraising totals exclude mezzanine vehicles.

Last year’s crest resulted from most of Canada’s largest buyout investors—, , and among them—all raising new funds at the time.

“We expect 2007 to be a solid year from a fundraising standpoint, but unlikely to match the totals for 2006,” Nathan said, adding that it would not be seen as a sign of softness in the market if that’s the result. This year’s Canadian fundraising total is expected to surpass those of 2004 and 2005, he said. For comparison’s sake, fundraising by U.S. buyout firms totaled $181.3 billion for all of 2006, and $67.4 billion for Q1 2007, according to information compiled by Buyouts.—A.N.