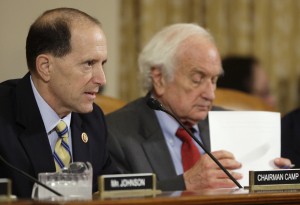 “If there’s a deal that’s ever going to get struck, (President Barack Obama is) going to have to give something, and they’ll have to give something, and that’s a good fig leaf for him to get some coverage,” said Brett Palmer of the Small Business Investor Alliance, an industry organization and lobbying group for SBICs and lower middle-market private equity firms. “It’s not something we expect to change, but it is something we’ll have to be more attentive to.”

Republicans have called for changes to the code as well. Certain segments of Congress consider the tax treatment of carried interest to be a “billionaire boys’ perk,” Palmer said. “There are a number of Republicans who are tired of defending this.”

Rep. Darrell Issa labeled the tax treatment of carry as a “classic example” of a loophole in 2012. In February, Rep. Dave Camp, the Republican chairman of the House Ways and Means Committee who retires from Congress next year, released a tax reform plan that would tax carried interest at a higher rate.

“We need to debate it and we need to do something about it,” Camp told The New York Times in November. “That’s why I put it in there. Even people in the industry agree we need reform, though they won’t say that publicly.”

“Any time you’re included in a draft like that, you’re going to be part of the discussion,” said Ken Spain of the Private Equity Growth Capital Council, commenting on the Camp proposal. “I think it’s a relatively open question, and no one should deny it’s at some level of risk.”

“People tuned it out like it was the boy who cried wolf, but with the greater potential for tax change with Republicans in charge of both chambers, there’s upside, but there’s also downside risk,” said Palmer of Small Business Investor Alliance. “That should be a warning sign to a lot of folks in the private equity industry, particularly in the lower and middle market … The industry ignores Washington at its peril.”

The Association for Corporate Growth did not respond to requests for comment.

Spain said the possibility of carried interest’s tax treatment changing outside the context of comprehensive tax reform would be limited, but that reform is “a top-three issue for Republicans in the House and Senate.”

“In order to have any shot of winning in 2016, they know they have to prove they can govern,” he said, adding that doing so will require the successful passage of major pieces of legislation, such as tax reform.

Republicans may also attempt to weaken certain aspects of Dodd-Frank, such as the requirement that managers with more than $150 million of assets register with the SEC. They also may push for greater clarity on how federal agencies regulate the private equity industry, Palmer said.

“Now both chambers are controlled by one party, and they can really coordinate their oversight (which will) lead to deeper analysis of what’s happening in the agencies … and give the industry a much more transparent understanding of what’s expected of them,” Palmer said.