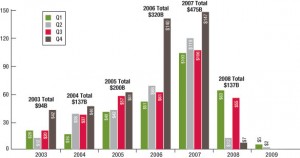 The economic siege that’s choking off business at corporations across virtually all industry sectors has turned into a significant source of acquisition opportunities for buyout firms. As these companies look for relief, they’re spinning off non-core and money-losing divisions at attractive valuations. Buyout firms have begun snapping up these assets in increasing numbers.

Corporate carveouts as a percentage of all deal activity grew more than four-fold in the past three months from the previous quarter, and have more than doubled from levels in recent years. At least 14 percent of the deals that closed in the second quarter of 2009 were corporate carveouts, compared to just 3 percent in the first quarter and 6 percent in full-year 2008.

“A lot of corporate sellers were holding out for a market rebound, and I think now everybody understands that we’re in this for the long-haul,” said Scott Honour, a senior managing director at The , a Los Angeles buyout shop that closed two corporate carveouts in the second quarter. In May, Gores Group invested $75 million to acquire a 51 percent stake in Stock Building Supply, a bankrupt division of Wolseley PLC. A month earlier, Sagem Communications, a portfolio company of Gores Group, acquired the broadband business of Gigaset Communications for an undisclosed amount.

“There’s a new value paradigm that’s out there, and people are somewhat resigned to it, especially in the corporate seller world,” Honour said. “I’m not sure that the individual company owners, the family businesses and whatnot, have had the same realization.”

Other firms involved in corporate carveouts in the second quarter include , which acquired the Iowa and Ohio-based tire-recycling businesses of GreenMan Technologies Inc. in May. The sale freed up GreenMan Technologies, which trades on the Over The Counter Bulletin Board, to focus on growth opportunities for its remaining subsidiaries. Elsewhere, . bought the Guardtop Asphalt Coating Division of Vulcan Materials Co., a New York Stock Exchange-listed company that has recently been looking to enhance its financial flexibility.

While there’s no shortage of companies looking for an acquirer, the quality of most opportunities is down significantly compared to a year ago as earnings continue to evaporate in the arid economy, many deal pros say. That, combined with a dearth of financing options, has stunted deal activity over the last three months.

“We’ve had a couple of cases this year where companies that we’ve had under letter of intent either saw, or were expecting to see, 25 to 30 percent declines in EBITDA from the levels we bid on,” said Bob Fitzsimmons, a managing partner at New York’s , which buys companies with $2 million to $10 million in EBITDA. “The transactions just didn’t make sense anymore.”

Fitzsimmons said the sellers in both cases refused to take a corresponding 25 percent to 30 percent haircut in purchase price into consideration and the transactions were either killed or put on hold until performance ramped back up. High Road Capital did close two deals in the second quarter—both add-ons—and plans to remain active in the hunt for new opportunities in the second half of the year.

With reports being issued from The Federal Reserve saying that the recession is easing, and some economists predicting an end to the economic slide by the close of 2009, it’s possible we may be nearing the trough of this economic cycle—good news if you’re a general partner looking to buy assets before they start to rise in value. But if there’s one lesson that firms have taken from the market’s collapse this time around, it’s to proceed with caution.

“We need to be ready for a relatively long period of lackluster economic activity,” said James Andersen, managing partner and founder of , an Old Greenwich, Conn.-based buyout firm that invests in the lower end of the middle market. “If we’re wrong, then we can react, but it’s better to have a conservative point of view now than to be too aggressive and get hurt.”

The Gores Group’s Honour agrees: “We’re operating the companies we own and looking at the new deals we do as if the current economic climate will continue for a sustained amount of time, likely through 2010.”

In terms of the deal pipeline, there remain 24 control-stake transactions that reached agreements in the second quarter but have yet to close. The 15 pending deals with disclosed valuations represent $4.7 billion in total transaction value, while the largest three make up more than 80 percent of that sum.

The largest of the bunch is .’s $1.8 billion agreement to acquire the entire share capital of Oriental Brewery Co. Ltd., a South Korea-based manufacturer of beer and liquor currently controlled by Anheuser-Busch InBev, in a deal which is expected to close sometime in the third quarter. ’s planned $1.1 billion acquisition of Tokyo’s bankrupt real estate investment trust, New City Residence Investment Corp., is next in line in terms of size, followed by a star-studded, $900 million club deal including ., The and The to buy Coral Gables, Fla.-based bank holding company BankUnited Financial Bancorp.

The large and mega-deal markets have long since been halted by the credit freeze, which has gradually extended down to smaller transactions. Now there are signs the chill is spreading to the smaller markets, too.

Not a single closed transaction in the past three months hit the $1 billion hurdle, according to Thomson Reuters.

In April, listed buyout and hedge fund manager completed the largest LBO of the second quarter with its $889.8 million add-on acquisition of Pioneer Global Asset Management’s real estate fund management business to Torre SGR SpA, a manager of closed-end real estate funds based in Italy. In May, a consortium including ’s Crane Holdings investment unit, , and closed the second largest deal of the period with the $551.5 million buyout of USJ Co., a Japan-based amusement park operator. The third largest deal of the quarter was Warburg Pincus’s $160 million buyout of Scotsman Group LLC, a manufacturer of ice systems, in a transactionl that closed in mid-May.

On the small end of the market, cash-flow loans for companies that generate EBITDA up to $10 million have become far harder to find in the past month or so. Deal pros say lenders have abandoned these smaller deals to focus on larger ones that generate more lucrative fees. And with the economic outlook uncertain, lenders also fear small companies have fewer resources to survive a long recession.

Several sources have told Buyouts that some lenders, including Wells Fargo, have begun focusing their cash flow efforts exclusively on companies with minimum EBITDA of $10 million for reasons that could include fee generation on larger loans to a perceived volatility in smaller companies. (Wells Fargo was not able to comment by press time.)

Clearview Capital’s Andersen has noticed the phenomenon. “Even if you have a good company that you think you can get a deal done with, there is almost no cash flow lending available; to the point of zero in some cases,” he said. “It’s gotten very bad and I think we’ve seen it get even worse over the last three months.”

The result, said Andersen, is that Clearview Capital is spending more time trying to dig up new financing sources, a search that includes regional and local banks. The firm, investing from its $250 million second fund, closed two deals in the second quarter: the add-on of Riverside Adult Day Center to its Senior Care Centers of America Inc platform, and the buyout of plastic lamination film provider Troy Industries Inc.

When cash-flow or asset-based senior loans are available, general partners in the small and middle markets say that they tend to top out at about 2.5x EBITDA, while total leverage typically maxes out at 3x to 3.5x.

Meantime, add-on deals remain high on the priority list of buyout firms of all sizes. Out of the total 101 deals that closed in the second quarter, 45 were add-ons to existing portfolio companies, according to Thomson Reuters. According to industry pros, the market has become flush with smaller companies unable to finance their expansion or that are otherwise in need of capital from a willing parent. Buyout shops, meanwhile, hope to shore up their portfolio companies through consolidation and grow them at a time when the competition is weakened.

Add-on acquisitions can also be used a tool to de-leverage platform companies, which can be an important element in the survival of businesses that were acquired in the peak period at historically high leverage multiples. Such transactions are often financed with up to 100 percent equity from the buyout fund itself rather than by issuing new debt through the portfolio company. Once the add-on is completed, the cash flow from the now-larger portfolio company can be used to pay down debt on an accelerated basis.

New York-based buyout shop American Securities is among the busier firms today on the add-on front, having closed three bolt-on deals in the second quarter and a total of 11 within the last year. “We have seen a substantial, substantial increase in add-on activity,” said David Horing, a managing director at American Securities. “I would say it’s better now than it’s ever been in our history.”