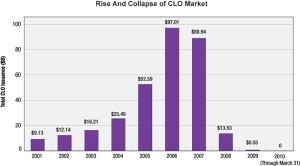 Ripples of life have emerged in the U.S. collateralized loan obligation market. However, the slow pace of recovery expected means an even longer wait for the leverage lending market to return to mid-2000s form.

, (The ’s credit subsidiary) and financial services provider Orix Corp. are all separately in the market looking to launch new CLOs, according to Reuters, publisher of Buyouts. And at press time on April 16, The Wall Street Journal reported that Bank of America Merrill Lynch and Symphony Asset Management had teamed up to launch a new $500 million CLO earmarked for new loans.

That follows news in January that NewStar Financial Inc., a Boston-based specialty finance company, had launched what it said was the first new CLO since the market went to pot due to the credit crisis. Most of the $275 million vehicle was earmarked to refinance existing debt, with $50 million set aside to provide new lending capacity.

A CLO is a pool of capital that acquires interests in various loans, bundles them together, then issues new securities backed by the loans in tranches with varying levels of risk and return. These capital pools were among the main buyers of leveraged loans during the buyout boom of 2006 and 2007, giving lenders the opportunity to quickly originate and syndicate copious amounts of debt to finance new LBOs. Approximately 75 percent of the buyers of leveraged loans in the peak period were non-bank entities, and a significant portion of those non-banks were CLOs, according to Timothy J. Conway, chairman and CEO of NewStar Financial.

New CLO issuance since the credit crisis has been light, adding insult to an already injured leveraged loan market. In the more than two years spanning Jan 1, 2008 through March 31, 2010, only $14.1 billion in new CLOs hit the market, while nearly seven times that amount was issued in 2006 alone (see related chart). The hope is that a revival in the CLO market could help to push up leverage multiples, which have remained stubbornly depressed despite a comeback in the LBO deal market.

Along with a smattering of new product, the CLO market has been aided by developments in the high-yield market and the secondary market for loans. The recent refinancing boom sponsored by the high-yield market is providing windfalls to existing CLOs as loans get refinanced; given that they tend to have re-investment periods of about six years, CLOs have been recycling those proceeds into new investments. The first quarter alone saw about $27 billion in junk bonds used to repay leveraged loans, according to Thomson Reuters LPC.

At the same time, the pricing rebound in the secondary market for loans is building incentive for investors, including CLOs, to back new loans rather than buying existing issuances. At the trough of the credit crisis, the average bid for a leveraged loan in the secondary market was just 64.61 percent of par, a significant discount that left investors little reason to want to back new loans. Today, however, average bids are in the realm of 90 cents on the dollar, making primary loans a more attractive investment, according to data tracked by TRLPC.

All that said, buyout shops should expect the next incarnation of the CLO market to look anything like it did during the boom period. “Broadly speaking, the CLO market was a meaningful source of capital that went into funding the debt in LBOs,” said NewStar Financial’s Conway. “Because the market has been shut down and a lot of the players who managed the CLOs have been weeded out, I would say that may lead to a shortage of debt capital.” He added: “As M&A activity and LBO volumes start to pick up, it’s not clear to me where the lending capacity will come from to replace the capital from the CLO market.”

Indeed, since the beginning of the year, there has been an active consolidation across the CLO market as managers look to either team up for scale or get out of the business altogether. At press time, Apollo Management and (’s credit subsidiary) were reportedly bidding on $4.3 billion in existing CLOs managed by Stanfield Capital Partners LLC.

Fewer players in the CLO market most likely means fewer new CLOs being launched. When one considers that the reinvestment periods of most existing CLOs will come to an end in sometime in 2012 to 2014, the lack of new issuance today could lead to a prolonged credit pinch in the years to come. “No matter how you look at it, the CLO market is going to be smaller and provide less capital as a percentage of the overall leveraged loan market than it used to,” Conway said.