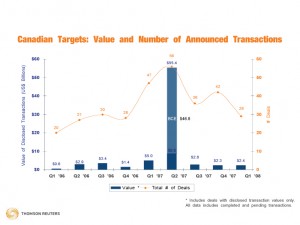 Buyout firms announced 29 deals in Canada in the first quarter of 2008, a far cry from the 47 deals announced in the year-earlier period, and also down from the 42 deals announced in the fourth quarter of 2007, according to data recently released by Canada’s Venture Capital and Private Equity Association and Thomson Reuters Markets. Among the quarter’s signature transactions were .’s agreement to buy CHC Helicopter Corp. for $1.5 billion, .’s buyout of Timothy’s World Coffee; and .’s buyout of The Surepoint Group, a company in Alberta that provides supplies and services to the oil and gas industry.

The nine Q1 announced deals with disclosed valuations added up to $2.4 billion. That was down over 50 percent from $5 billion in the first quarter of 2007, but up slightly from $2.3 billion in the previous quarter.

All told, last year saw $65 billion worth of announced LBOs in Canada, concentrated in sectors such as software, manufacturing and food products. Of the 181 deals, up from 105 the year before, by far the biggest was the pending -led buyout of Montreal telecommunications company BCE. Even without BCE, 2007 would have been a record year in deal volume, with $18.7 billion in disclosed LBO value, more than double the $8.3 billion posted in 2006.

Canadian buyout firms, which together raised $1.7 billion in 2007, and $8 billion in 2006, continued to be more active in 2007. They sponsored 132 deals in 2007, compared to 97 deals in 2006, regardless of target location. They sponsored 21 deals in the first quarter. The majority of other investors were U.S.-based firms, which tend to enjoy higher market share on the bigger deals. According to Stephen Lister, managing partner of , a Toronto-based firm, mid-market companies prefer to sell to Canadian investors. “Because there aren’t a lot of [local] firms, the firms that are in the market get a lot of activity,” he said.

The Canadian LBO market has slowed primarily due to the U.S. credit crunch, which has made buyout shops less able to pay up for companies. Sellers have apparently been slow to adjust to the new reality. “If you’re someone who thought your business was worth 10x or 12x EBITDA based on a market where you could get cheap, easy credit, that’s changed,” said Sandy Riley, managing director at , a Winnipeg firm.

That the mid-market has remained as active as it has is also a tribute to growing interest from foreign investors, which view the market as somewhat underserved, said Imperial Capital’s Lister. The Canadian government’s 2006 decision to eliminate income trusts has also helped sustain the market. Imperial Capital, for example, lost at least six deals when sellers decided to convert their companies to income trusts rather than sell to the firm. “I was thrilled, frankly, when they killed it,” Lister said.

Meantime, the 100 remaining Canadian income trusts should provide a continuing source of buying opportunities, as they are slated to be bought, merged or converted to corporations by 2011. “It definitely is a universe of entities that are looking for some kind of solution and private equity is one,” said Peter Gottsegen, managing partner and founder fo , a New York-based firm that does most of its deals in Canada. CAI in November bought CCS Income Trust for $3.8 billion with the help of U.S. firms , ., and .