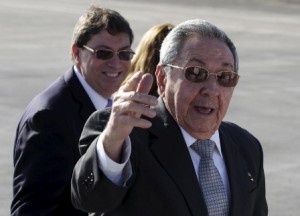 Events have moved fast since: Cuba is to come off the U.S. list of state sponsors of terrorism, Obama shook hands with Cuban President Raul Castro in April, and the Paris Club of wealthy creditor nations is working on expediting debt talks.

That has increased interest in all Cuban assets, including debt that has been in default since the 1980s and which is now largely in the hands of specialist distressed debt funds.

“All sorts of people are ringing us up who want to buy Cuban debt,” Nicholas Berry, chairman of Stancroft Trust, who built up his stake in defaulted paper more than a decade and a half ago, told Reuters.

Berry holds around 120 million pounds ($190 million) worth of Cuban debt at face value without deferred interest but he paid between 1.5 and 9 cents in the dollar for the securities. He says he is not selling as expects the bonds will rise further as relations between the countries thaw.

“We have held it for 16 years, we can hold it for another 16 years; for us it is just a great store of value.”

Cuba is seeking foreign investment and is hungry for fresh credit, but it is customary for a country in default to cut a deal on outstanding debt before returning to the markets.

In April, Stancroft Trust and two other parties formed a London Club committee to negotiate debt held by the private sector. The three funds, according to their own estimates, hold almost half the country’s debt obligations to commercial creditors.

While it is hard to assess the “recovery value” of these defaulted bonds is any debt workout, Berry reckons 25-35 cents (in the dollar) now represents “a good balance between the potential of the situation which is very big, and the reality, which is not so hot.”

He was referring to many issues still to be solved and previous false starts. For instance, in 2005 trading volumes on the bonds spiked on news of Fidel Castro’s poor health, according to EMTA, the emerging markets debt trading and investment industry trade association.

Discovering just how much the debt is worth now remains tricky because so few of the loans ever change hands.

Oliver Butt, partner at distressed debt brokerage City & Continental, says he recently brokered a deal for a yen-denominated bilateral loan to Cuba that changed hands for 17-1/2 cents in the dollar.

Butt estimates “higher quality” debt would change hands for 20-25 cents, and that some investors might be tempted to sell in the 25-30 cents range.

“The original holders of the debt have sold a long time ago … and [those who bought it] have waited and waited and waited, the market has become very thin in recent years,” he said. “Though prices have also steadily gone up.”

Hard data about Cuba’s debt, or indeed any other economic aspect of the 11-million-strong nation, are hard to come by.

Cuba last reported its “active” foreign debt, accumulated after it declared a default in the late 1980s, as $13.9 billion in 2011. It no longer reports its “passive” debt from before the default, which economists estimate at $8 billion.

The chief of the Paris Club, Bruno Bezard, estimated during a visit to Havana in March that the Caribbean island owed $15 billion to $16 billion to wealthy creditor nations, with France being the largest of the 15 creditor nations.

Some of the defaulted issues have already been dealt with.

In the past four years, Cuba has restructured its debt with China, Japanese commercial creditors, Mexico and Russia, each time obtaining substantial reductions in what it owed in exchange for payment plans it can meet.

Berry said he expected negotiations between Cuba and its creditors to take months, if not years, adding his focus as a private creditor was to get an instrument that would reap him the rewards of Cuba’s economic potential in the decades ahead.

(Reporting by Karin Strohecker for Reuters)