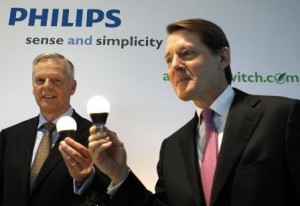 Philips is keen to keep the bid battle going until the end of the week in an effort to get the best price for the asset which could be valued at roughly 2.5 billion euros ($2.6 billion), the sources said.

One of the sources spoke of a “significant price gap” between the two offers tabled so far, playing down Bain’s ability to match or outbid its rivals.

“Unless CVC and KKR fear they’re overpaying, it’s their deal,” said the source, who asked not to be named as the matter is confidential.

Philips’ adviser Morgan Stanley aims to enter exclusive talks with one of the two sets of bidders in the coming days, wrapping up a process which started a year ago when the Dutch electronics group combined its so-called Lumileds and car lights divisions into a standalone company ahead of a spin-off.

Spokesmen for Philips, Morgan Stanley and Bain Capital declined to comment. Representatives at CVC and KKR were not immediately available for comment.

Philips, which started making light bulbs 123 years ago, has vowed to focus on higher-margin activities as earnings from its lighting operations have been squeezed in a price war with Chinese makers of light-emitting diodes (LEDs).

Profit figures for the business have not been made public but sources have said in the past its EBITDA (earnings before interest, taxes, depreciation, and amortization) is about 290 million euros.

Peers such as Hella, Cree and Acuity trade in a range of 6.6 to 13.3 times expected earnings.