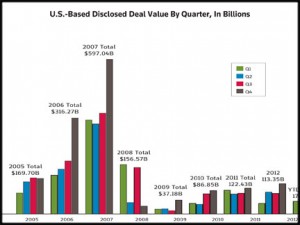 Factoring in the two announced LBOs of Dell Inc. by Silver Lake (still in a bidding war) and H.J. Heinz & Co. by Berkshire Hathaway and 3G Capital, the first-quarter value of announced and closed transactions as of late March came to an impressive $77.5 billion, the highest dollar volume since the whopping $211 billion tally in the pre-crisis fourth quarter of 2007.

Industrial LBOs maintained their lead as the most popular deal type, as such companies offered hope for better profit growth in a still-sluggish economy.

Deal-makers remain modestly bullish for the balance of the year, assuming the cost of credit remains low and U.S. GDP continues its slow-but-steady rise. While some said the overall pace of deals may not match 2012, optimistic comments aren’t hard to find.

“Investors’ continued search for yield in an environment of historically low interest rates is fuelling robust high-yield bond and leveraged loan markets, which is in turn driving extraordinary levels of private-equity deal activity,” John Miller, head of the global financial sponsors and global industrial groups at Barclays and an active deal-maker in the quarter, told Buyouts.

The first quarter’s announced and closed deals of 321 eased back from 361 in the year-ago quarter and dropped sharply from 516 in the fourth quarter of 2012. It’s the lowest combined total since 314 in the second quarter of 2011. (Data for this issue was collected on March 21 and doesn’t include the last 10 calendar days of the quarter).

Not surprisingly, leverage rose as average debt multiples for leveraged loans to corporations with more than $50 million in EBITDA increased to 4.9x in the first quarter, from 4.5x in the year-ago period, according to data from S&P Capital IQ. The latest quarter’s leverage level dipped from 2012’s average of 5.3x EBITDA. Back in 2007, average debt multiples stood at 6.2x EBITDA, before falling to 4.9x in 2008

Despite help from credit markets, challenges faced deal-makers. The fiscal cliff deal in Congress dampened first-quarter sentiment by causing taxes on dividends and capital gains to rise for some investors.

Uncertainty about fiscal policy from Washington to Cyprus, hardball fundraising and tougher pricing presented obstacles as well. The rally in the stock market also pushed up buyout sum expectations for publicly traded companies in talks to go private.

But among the deals that did get done, the industrial sector remained the most popular for mid-market and other players with 49 deals. Consumer products and services ranked No. 2 with 38 deals, followed by 36 from the high tech space.

In the year-ago quarter, industrials broke out as the most popular place for sponsor-backed acquisitions for the first time since 2009, as dealmakers moved in at the perceived bottom of the cycle. The forecast at least for the industrial sector remains robust.

“The industrial sector is so fragmented and with so many subsectors, there’s a lot of room for consolidation and cost-cutting,” said Scott Bok, CEO Greenhill & Co., an independent investment bank that advises target companies. “There’s fairly slow economic growth. Companies are having a hard time growing the top line, so they’re trying to consolidate to drive earnings growth. The industrial space is…fertile.”

Overall, private-equity firms cut a wide swath in the broad M&A market as players in an established asset class that’s rebounded after surviving the worst of the 2008 financial crisis.

The effort by Silver Lake to take Dell Inc. private with company founder Michael Dell for $24 billion occupied center stage in the merger acquisition arena in 2013. At press time, the computer maker confirmed it received drew two other rival bids from Blackstone Group LP and billionaire investor Carl Icahn. It’s already one of the largest LBO transactions on the books in years and the price could go higher.

Outside of these deals, private-equity principals drew fewer headlines as Mitt Romney’s presidential campaign and his experience at Bain Capital receded in the mainstream media’s rear-view mirror.

But the relatively small $410 million purchase of the snack cake portion of Hostess by Apollo Group and Metropoulos & Co. drew plenty of attention in the blogosphere with mentions of its iconic Twinkies brand. C. Dean Metropoulos will lead the sweets maker, while his sons Daren and Evan promised to get the dessert cakes back on store shelves by the summer. Blackstone Group and Metropoulos bought the unit
in a bankruptcy auction from Ripplewood Holdings, which had assumed control of the company in 2009.

LBOs contributed to a 62 percent increase in overall merger and acquisition activity to $207 billion in the United States, including announced deals, up from $127.5 billion in the year-ago period, according to Thomson Reuters data.

Carl Thoma, managing partner at Chicago-based Thoma Bravo, said the middle market remains robust for 2013, with interest rates remaining lower than during the private-equity boom of 2007.

“There’s a lot of people planning to take advantage of that,” Thoma said in an interview. “The second and third quarter will be a substantial pick up. If you’re not negotiating a deal now, you want to see how the year is starting out and then things will get busier.”

Thoma jokingly said he spends “two hours a day” studying whether the U.S. Federal Reserve will start tightening interest rates. Such a move could put a damper on lending. He figures it’ll take at least another year or maybe two before employment levels rise enough to
prompt a major change in the Fed’s current Quantitative Easing program.

“If you buy now, you know you’ll face higher interest rates — and yet today many are willing to pay,” he said. “Multiples are up one time or two times from a year ago. It’s interesting times….We’re in a market right now where you should be selling more than you’re buying.”

While the credit and deal markets remain frothy, Thoma doesn’t see the private-equity sector facing the same danger during the peak of deal-making in 2007.

“The economy is already south,” Thoma said. “We have a low growth rate. It can’t be as frothy as 2007. The economy can’t tank as much because it’s already down there.”

Marc Leder, co-chief executive officer of Sun Capital Partners Inc., said the LBO market stepped on the accelerator in the second half of last year, resulting in a lull in 2013. But activity has picked up in the past month.

“Equity markets are way up so it’s much harder for a buyout shop to offer a nice premium, and yet you have incredibly strong financing markets — they tend to offset each other,” Leder said in an interview. “There’s not going to be as much activity on the large-cap side this year as there was last year. The higher equity markets also tend to deter strategic buyers.”

More buyers are chasing “pristine, fast-growing companies,” and putting sellers in the driver’s seat, he said.

Looking ahead, Leder expects Sun Capital, a mid-market turnaround specialist, to put in a “typical” year with maybe a dozen platform acquisitions.

“We’re buying companies that are struggling, [with] liquidity issues and operating problems,” he said. “A slow-growth environment is perfect for our strategy. It creates more opportunities and it doesn’t impede our effort.”

“A lot of the overhang that we saw in the third and fourth quarters around the fiscal cliff and the U.S. election has largely dissipated,” Jack MacDonald, co-head of Americas M&A at Bank of America Merrill Lynch, told sister news service Reuters. “Looking ahead, there’s potentially less uncertainty and volatility with less downside risk.”

Barclays executive Miller, who has led a beefed up presence by the bank in the industrial sector, said private-equity transactions have returned to a historic high as a percentage of overall banking activity.

“We remain bullish on the rest of the year and expect robust activity to continue, as sponsor dry powder remains high, credit markets are likely to remain supportive and equity markets evidence strong demand for sponsor-driven IPO and follow-on issuance,” Miller said.

Meanwhile, Greenhill’s Bok pointed to the quarter’s lower overall deal count as a reflection of more difficult negotiations in going-private transactions. He sees more potential for acquisitions than recent results would suggest.

Greenhill advised on the $830 million acquisition of data communications firm TNS Inc., as well as the $4.9 billion DuPont Coatings purchase by Carlyle Group and worked with super-market chain Albertson’s on its $3.3 billion purchase by an investor group including Cerberus Capital Management.

“The financing markets are incredibly favorable and that would lead you to believe there would be more deals,” Bok told Buyouts in a phone interview. “Some companies have the fear if a private-equity guy wants to buy their company, then there’s more upside. Boards are cautious about selling firms to private-equity funds.”

“Dell is a transaction that would be very unlikely to proceed if the CEO Michael Dell wasn’t a huge shareholder,” Bok said. “He owns stock and runs the company and that puts him in a position to lead a transaction.

“Berkshire is also fairly unique because people don’t think of them as a private-equity fund. They’re more of a long-term strategic investor. While many companies are reluctant to sell to private equity, there’s almost an enthusiasm to do a deal with Berkshire Hathaway.”

Despite the challenges ahead, Bok said 2013 could bring an uptick in deals, but he’s not expecting another golden age in the private-equity arena for now.