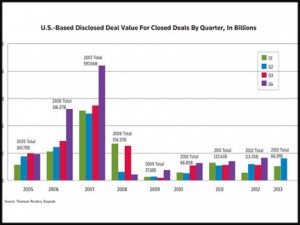 U.S.-based buyout shops closed an estimated 260 mergers and acquisitions in the three months ending June 29, down about 18 percent from 319 in the first quarter and about 23 percent off from the 337 deals in the second quarter of 2012, according to Thomson Reuters data.  In the fourth quarter rush to beat the fiscal cliff, private equity firms closed 482 deals, by comparison.

With the first half of 2013 coming to a close, sponsor-backed closed mergers rang up a combined disclosed value of $66.2 billion, up from $44.6 billion in the first half of 2012. But without the $27 billion take-private deal of H.J. Heinz by Warren Buffett’s Berkshire Hathaway and 3G Capital Partners that closed on June 7, dollar volume would have dropped.

“Merger and acquisition bankers have been surprised with the lower deal count in 2013 despite strong private market values, recent highs in the public markets and readily available credit,” said John Eydenberg, co-head of investment banking coverage and advisory-Americas, and global head of financial sponsors coverage for Deutsche Bank.

“Perhaps the biggest dampener on volume has been continued uncertainty in the global markets,” Eydenberg wrote in an email to Buyouts. “A year ago, Europe was the concern, then worries shifted to the Fed tapering and a slowdown in Chinese growth. With each new issue, the markets are reminded that global de-leveraging will take time and there will be bumps along that road.”

Some of that uncertainty spiked late in the quarter as the U.S. Federal Reserve signaled it would start to cut down on its bond repurchasing program. Bond yields rose, triggering interest rate volatility.

Outside of jitters in the debt markets, record levels of cash and rising equity prices reduced the urgency for large corporations to sell assets to buyout firms seeking carve-out transactions. A healthy market for dividend recaps also provided a lucrative alternative to mergers.

“The debt markets are still frothy, so if a company runs a sale process and it doesn’t go as planned, there is the opportunity to do a leveraged recap,” said Chris Nugent, a partner in Goodwin Procter’s private equity group. “The shareholders can pull money out as a dividend and have a second bite at the apple if they want to sell the company later.”

Loftier stock prices of publicly-traded companies made deal prices more challenging as buyout firms moved to avoid higher multiples of the past. Back during the boom of 2006 and 2007, buyout shops paid as high as 8x to 9x EBITDA for large acquisitions. Now, purchase multiples typically range between 6x and 7x EBITDA for larger deals and 5x to 6x EBITDA in mid-market deals, according to Robert Schleusner, co-head of global leveraged finance for Bank of America Merrill Lynch.

Industrywide, second-quarter LBO purchase price multiples fell to 7.8x EBITDA, compared to 8.4x EBITDA for all of 2012, according to S&P Capital IQ LCD. Equity levels in transactions fell to 29.6 percent in the second quarter, from 37.7 percent in 2012.

Summing up the deal environment for the quarter, Apollo Global Management buyout king Leon Black was widely quoted in his appearance at the Milken Institute in late April, when he said, “the financing market is as good as we’ve ever seen it” and added the firm is “selling everything that’s not nailed down.”

While Apollo launched or registered eight U.S. IPOs in the first half, it only closed one acquisition in the second quarter: the firm’s Jacuzzi Brands Group platform paid an undisclosed sum to buy Dimension One Spas Inc, a manufacturer and seller of hot tubs and swim spas, according to Thomson Reuters data.

Overall, high tech and consumer products ranked as the most popular sectors with 47 closed deals each in the second quarter, followed by 31 for industrials, 27 for materials and 26 for health care, according to data from Thomson Reuters. Buzz also continued around the energy sector as private equity firms took part in the billions being invested to boost U.S. oil and gas production.

“Energy continues to be a hot space,” Bank of America Merrill Lynch’s Schleusner said. “Outside of that, I think the key question is whether the company has real growth opportunities. It’s tough to get a premium valuation with very little organic growth prospects.”

Among closed mergers in the second quarter, a club deal led by Carlyle Group to purchase Focus Media, a provider of electronic billboards in China, ranked second to Heinz in dollar size at just under $3 billion.

Advent International’s purchase of the coatings and resins business from Cytec Industries for $1.1 billion—in the number four slot for the quarter—marked the only other deal to crack the nine-digit barrier.

“Three in a quarter may be a record for us,” Todd Jerles, principal at Trivest Partners, said in an email. “Our unique sourcing efforts…have driven strong, non-auction, deal flow for us this year.”

In a forward indicator for buyout deals, a total of 74 mergers by private equity firms valued at $15.5 billion were announced but not closed in the second quarter, while 36 deals valued at $25.7 billion announced in the first quarter were still pending as of June 29. Most of these deals will close in the second half of 2013.

Silver Lake continues to occupy center stage of the overall merger arena with its $24.4 billion take-private bid for Dell Inc, the only deal over $10 billion on the private equity landscape this year outside of Heinz.

Outside of Dell, a tech deal for BMC Software Inc leads the list of pending mergers by dollar size. Bain Capital and Golden Gate Capital plan to buy the company for $6.5 billion. In another hefty pending deal in the tech sector, Vista Equity Partners plans to buy Websense Inc for $905 million.

Despite the slower deal flow, overall conditions remain favorable enough for sponsors to stay the course on their multi-year strategies.

Sun Capital plans to continue its overall pace of about 15 deals in the first eight months of the year, which is “consistent with our long-term track record,” said Marc Leder, co-CEO of the firm.

Sun Capital continues to sift for out-of-favor deal types such as European companies. “We’re getting incredible bargains in Europe,” Leder said. Overall, “there’s been a big pick-up in companies coming to market lately,” he said.

Alison Mass, co-head of the financial sponsors group at the investment banking unit of Goldman Sachs, said lofty valuations slowed the pace of new investment by sponsors in the first half, but buyout shops are positioning their balance sheets for the coming months.

“Recent volatility in credit markets has served to highlight that the extraordinarily low interest rate environment will not last forever,” she wrote in an email to Buyouts. “As a result, many sponsors are planning ahead to minimize their interest rate and refinancing risk exposures.”

Money is flowing out of fixed income and into floating rate asset classes such as loan mutual funds. The market for collateralized loan obligations, or CLOs, has jumped, providing more potential capital for leveraged buyouts.

In terms of mergers and acquisitions, no repeat is expected of the late 2012 rush to avoid higher taxes for the fiscal cliff. But deal-making may continue to gain traction if bullish indicators such as the June U.S. jobs report deliver more evidence of an economic uptick.

In a reassuring sign for deal-making, Ernst & &Young estimated that sponsors now hold about $350 billion in capital to deploy on deals. With stiff competition for deals in the United States, firms may step up efforts to look into emerging markets such as Mexico, Chile, Thailand and Indonesia.

After taking a pass on acquisitions in the quarter, Victor Vescovo, chief operating officer and managing partner of mid-market firm Insight Equity, said investment bankers have been forecasting more businesses for sale in the second half of the year after a lack of “great assets” so far in 2013.

“We have dry power and we’d like to put it to work but we will do it at good valuations, but not historically high, aggressive ones,” he said. “That’s the sentiment that most private equity firms seem to be having lately. There doesn’t seem to a drive to do a deal at any price.”