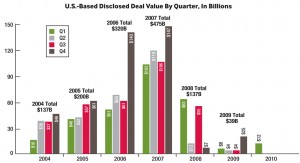 Buyout shops continued to tip-toe back into the deal market in the first quarter, encouraged by a stabilizing economy and thawing credit markets.

U.S. buyout firms closed 147 deals around the world in the first three months of 2010, marking a healthy jump from the 121 closed in the final quarter of 2009, as well as the 120 deals closed in the first quarter of 2009, according to Thomson Reuters, publisher of Buyouts. Disclosed total deal value reached $11.7 billion for the quarter. That was up more than 50 percent from the same time last year but down from the $25 billion tally in the fourth quarter of 2009, a quarter that saw the $11 billion takeover of auto parts supplier Delphi Corp. by . and and the $2 billion buyout of Internet phone company Skype Technologies SA by a group of investors led by .

At the same time, the pipeline of deals continued to grow, indicating the deal market has momentum. Buyout shops announced 189 deals in the quarter (both closed and pending), up from the 161 deals announced during the same period last year, though down from the 204 deals announced in the last quarter of 2009 (see charts, p. XX).

“I’m very pleased with where we are,” Mark Bradley, the global head of financial sponsor coverage at Morgan Stanley, told Buyouts. “The sponsors have a significant amount of committed capital, the credit markets have started to loosen up and we’re starting to see deal activity again.”

Indeed, Morgan Stanley is already offering buyout shops financing of 6x EBITDA on some deals, Bradley said. “Normally it takes longer to get to that level,” he added. Lawrence Golub, president of mid-market lender , added that the disappearance of generous discounts in the secondary market for loans has more lenders interested in putting capital to work in new deals. Senior cash-flow loans, he said, are typically pricing at Libor+550 basis points with a Libor floor of 1.75 percent to 2 percent. Meantime, he’s seeing multiples of senior cash flow loans of around 3.5x to 4x for senior loan facilities of $150 million or more.

The deal market might be even stronger, if it weren’t for sellers quickly adjusting their pricing expectations higher. “A disproportionately large amount of deals where there’s an initial handshake on price are falling apart,” said Golub, pointing to sellers who “are often unwilling to compromise on purchase price.” Case in point, Blackhawk Products Group, a company that makes hunting and climbing gear, reportedly walked away from a deal with in February over pricing.

Golub said that typical purchase price multiples on sponsor deals have been around 7x or 8x EBITDA, which means, even with a recovery in the credit markets, buyout shops still need to cut a sizable equity check to close transactions. In February, , for example, provided 48 percent of the $928 million purchase price in equity for restaurant chain CKE Restaurants Inc. Before they finance a deal, executives at Golub Capital want to see trailing 12-month EBITDA consistently recovering from its lows in the downturn for at least a few months and an equity check of at least 40 percent.

The most popular sectors for buyout shops in the first quarter remained high technology, consumer products and services, and industrials. Add-on deals also remained popular, accounting for nearly half of deal volume, as buyout shops continued to build on to their portfolio companies in anticipation of exits down the road.

Carve-outs accounted for only about 2.5 percent of deals, down from 9.1 percent in the fourth quarter. This could reflect improvement in the economy, which has strategic buyers feeling less pressure to generate cash by selling non-core assets, Tom Avery, head of the financial sponsors group at investment bank Raymond James, told Buyouts. “Carve-outs are also notoriously hard to do, so the PE guys may be focusing their efforts on the more robust and better quality deal flow elsewhere.”

The largest deal of the quarter, the buyout of IMS Health, was financed with high-yield debt, a financing tool that wasn’t deployed in a single sponsor deal in all of 2009.

In February, the health care technology company issued $1 billion in senior notes due 2018 to help finance and ’s $5.2 billion buyout of the company (was also a co-investor). “To have done a $5 or $6 billion deal right at the beginning of the next buyside cycle? That tells me that we’ll be doing bigger deals and a higher volume of deals in this cycle more quickly than we did in the last cycle,” said Bradley of Morgan Stanley.

A number of firms made their first platform control-stake investments in the first quarter after a prolonged dry spell. made its first acquisition since October 2008 in March when it bought FrontStream Payments Inc., a credit card payment processor. “We do feel that the M&A market is stabilizing and starting to recover,” Terry Mullen, the founder of Arsenal Capital, told Buyouts. made its first-ever acquisition, more than four years after media entrepreneur Robert L. Johnson founded the firm. In January the firm paid $90 million to buy Fleischmann’s Vinegar Co. Inc., which supplies industrial grade vinegar to food companies.

And Leonard Green made its first acquisition in 28 months in January when it bought AerSale Holdings Inc., a company that buys used aircraft, for $250 million. The firm had been on the sidelines in part because executives there thought purchase price multiples were too high in the latter half of the buyout boom. “You need a market where credit is not too easy, not too tight, and we’re kind of right there now,” John Danhakl, a managing partner at the firm, told Buyouts in January.

Turnaround shops were among most active investors in the quarter. The second largest deal of the quarter was ‘s and ’s acquisition of Simmons Bedding Co. out of bankruptcy. was among the second-most prolific firms with four investments, and two other turnaround shops— and —each posted three investments.

Looking ahead, sponsors said they expect deal flow to stay strong, especially with changes to tax rates looming in 2011 for sellers. In the first quarter, buyout shop began looking at two deals in which the expected increase in the capital gains tax at the end of the year to 20 percent from 15 percent was a motivator for the seller, Watts Hamrick, managing partner, told Buyouts. Added Golub: “We could do a TV series on sellers biting their nails post-Thanksgiving: Do I accept a purchase price reduction or do I walk and give up on a 2010 deal? It would be a narrow audience but it would be a fabulous show.”