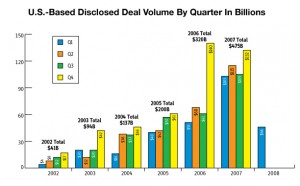 The credit freeze that started last summer has without question extended its cold grip down into the middle market and lower middle market. Deal flow is creeping to a halt, and pros are beginning to wonder if the scarcity of debt financing will dash hopes that 2008 would turn out to be a solid year for buyers.

In the first quarter of 2008, U.S.-based buyout firms consummated 226 deals, and the 53 with disclosed values were worth $46.1 billion, according to Buyouts and its publisher, Thomson Financial. The disclosed deal volume is the lowest since 2Q 2005 (see chart via link at right), and marks a sharp drop from $103 billion in 1Q 2007. The number of deals fell from the 283 completed in the same quarter a year before.

Meantime, the pipeline is running dry as well. In the first quarter of this year, U.S.-based LBO shops announced 163 control-stake deals, and those with disclosed values were valued at just $15.6 billion. In the year-ago quarter, U.S.-based firms announced 244 deals, and those with disclosed values topped a combined $47.2 billion, according to Thomson Financial (see chart). There isn’t a vast difference between announced and closed deals right now. Most new transactions are mid-market acquisitions, which typically are announced as soon as they’re closed. But the dwindling number of new deals announced in the first quarter signals that the deal landscape has entered a barren period.

The effects of a slowdown are already rippling out across the industry. The flock of service providers that flew in to cater to LBO shops in the last two years have experienced a decline in business. Ill-capitalized lenders that thrived in a healthy credit market have begun laying off employees and canceling plans to hire new professionals. Limited partners that have grown accustomed to regular capital draw-downs are instead watching their money pile up in bank accounts. In turn, that means that firms in the fundraising market are encountering headwinds for the first time in years because investors are nervous about the ability of LBO shops to deploy equity in a bear market. At the same time, LPs aren’t receiving proceeds from realizations, further dampening their ability to back new fundraising efforts.

So what is getting done these days? Remarkably, given the slowdown in consumer spending in the United States, companies dependent on discretionary spending accounted for the largest percentage of first quarter completed deals. Sixty-eight of the 226 consummated deals were in the categories of consumer staples, retail and consumer products and services, according to Thomson Financial. Other popular sectors included industrials, with 35 deals; technology, with 31 deals; and media and entertainment with 24 deals.

LBO shops also rediscovered the add-on deal in the first quarter, not surprising given that follow-on acquisitions can often be financed through existing credit agreements. More than 40 percent of the closed transactions—93 of 226—were bolt-on buys for firms, continuing a trend that began to emerge in the fourth quarter of 2007, when 65 of the 163 completed deals—or 40 percent—were add-on purchases, according to Thomson Financial. By comparison, just 59 of the 283 of closed deals in 1Q 2007—or 20 percent—were add-on acquisitions.

To be sure, garden-variety LBOs continue to take place, but they usually came after a lot of sweating by both buyers and sellers. Typically, that extra work is a product of what Rob Brown, a managing director of mid-market investment bank Lincoln International, called “a heightened level of skepticism” from lenders. “Things are taking a little longer,” Brown said. “There’s less acceptance of a story and much more scrutiny on current numbers rather than past results. How did a company do this week? This month?”

Indeed, those firms that did find ways to put money to work in the first quarter seemed to have developed creative strategies for dealing with the credit crunch. , a Denver buyout shop, closed five deals, including three platforms during the quarter, while energy specialist . consummated four, including a $2.7 billion buyout of a Scottish energy company; a $3.7 billion deal sponsored by First Reserve is set to close in the second quarter.

KRG Capital’s answer to the credit crunch was to deploy its own syndication capability, which it has been building over the last dozen years. In 2007 alone, the firm assembled senior debt syndicates totaling more than $1.2 billion. “It’s not new to us—it’s business as usual,” said Mark M. King, a managing director of the Denver-based firm. “It’s a differentiated model. Of course, it didn’t really matter eight months ago.”

In one recent example, KRG Capital assembled a syndicate of 13 senior lenders for a $225 million facility backing its acquisition and subsequent merger of two companies into a combined entity known as United Pegasus, an oil-field services business. In the buyout of Tri-County Petroleum, KRG Capital bridged the debt in order to meet the seller’s goal of a quick sale. The firm later put together a group of senior and mezzanine lenders. Both of these deals featured conservative leverage multiples—2.75x EBITDA on the senior debt for Tri-County Petroleum and 2.7x for Universal Pegasus.

First Reserve’s strategy centered on providing to nervous lenders in-depth research about target company prospects. “We can demonstrate almost mathematically all of the assumptions that underlie an investment,” said Mark A. McComiskey, a First Reserve managing director. “These are generally deals we know really well. That degree of due diligence helped banks get comfortable.” In addition, First Reserve has been taking on more risk itself by writing bigger equity checks, sometimes representing up to 40 percent of the capital structure of its deals.

It also helped that the targets of First Reserve’s big take-privates featured atypical financing structures. CHC Helicopter, the object of the firm’s pending $3.7 billion deal, was sitting on $1.2 billion in existing financing through operating leases. That debt comes cheap, at LIBOR plus 200 basis points, and First Reserve had to rely on only $800 million in new credit, a much easier proposition in a wavering market.

Like KRG Capital, Newtown Square, Pa.-based typically arranges the debt syndicates for its deals. That approach paid off with the recent acquisition of B&B Electronics Manufacturing Inc., a company the updates older industrial equipment with new networking devices. To be sure, the senior debt facility for B&B Electronics is small, but Graham Partners’s willingness to assume the syndication risk sent a positive signal to the sellers and drew more interest from lenders. The senior debt, at 3.25x EBITDA, ended up being oversubscribed, said Rob Newbold, a managing principal.

“Frankly, getting the deal done involved more work,” Newbold said. “We had three senior lending groups and three mezzanine groups at the management presentation. They don’t like that. They like to be the only ones there.”

For the deals that didn’t get done last quarter, blame the debt markets. Debt is expensive, and it’s scarce. Those two factors have so far blocked what many LBO pros figured would be a great buyer’s market. They predicted a weakened economy would bring distress to overleveraged companies, while less liquidity would draw fewer buyers to auctions.

“At a theoretical level, it should be a great time to be a buyer,” said Bryan Davis, partner in the Atlanta office of law firm Jones Day. “The pricing is getting better, and there’s somewhat less competition due to conditions in the credit markets. But the inventory of companies is down. LBO firms that have the flexibility to delay sales of portfolio companies are pulling back.”

Indeed, LBO pros had earlier forecast that an uncertain deal market would limit buyout firms and other sellers to putting only their strongest properties on the market. Mediocre companies with shaky results and shakier prospects just wouldn’t be able to find buyers. Instead, as Davis pointed out, firms that can afford to wait to sell a company are holding off, guessing that they can get a better deal when the credit market ultimately recovers.

Market participants also are reporting an uptick in failed sale processes and companies yanked from the auction block. Every deal seems contingent on something—on the buyer lining up financing, on the seller providing the last turn of pricing, on lenders not seeking too much protection through restrictive and burdensome covenants. And there are other contingencies, too. Aspects of deals that used to not merit much attention—potential litigation risk, say, or an environmental problem at a company’s plant—now halt otherwise attractive deals.

“People use to steamroller over problems with an indemnity clause or a price adjustment. Not anymore,” said James Westra, co-head of the private equity practice at law firm Weil, Gotshal & Manges. “All of those things are factors that, when money was more available, wouldn’t have been problems. Now they’re fatal flaws.” He added: “No one knows, literally, from one day to the next what the financial market is going to be like.”

For those deals that are getting done, the added scrutiny from lending institutions has translated into debt agreements with hefty pricing and more restrictive covenants. It’s not unusual for a credit agreement to feature a mandatory amortization covenant, lower original issue discounts, and a LIBOR floor—and possibly more. Pricing is now topping LIBOR plus 500 basis points for senior loans, up more than 150 basis points from a typical deal a year ago.

“We were finalists for a company we really liked but couldn’t make the deal work,” said Andrew Janower, a managing director of mid-market shop . “We could handle the cost of the debt, but the terms the debt market required weren’t consistent with the company’s business plan and in the aggregate were just too onerous. We tried to reduce leverage to compensate, but the price came down to the point where the seller just pulled the deal. ” Added Janower: “We’re bullish about investing in this environment because we think there are going to be good values available for creative sponsors. That said, with lots of sellers pulling back, we’ve still got to find something for sale that we like.”

If lenders are turning the screws on pricing, it’s of course because they call most of the shots in today’s market. Randy Schwimmer, senior managing director at mid-market debt provider Churchill Financial, said the number of lending requests coming through the door could fill Churchill Financial’s annual book of business in a single quarter. “We’re trying to prioritize because there’s so much flow,” he said.

And while many lenders remain active in the middle market, the ongoing credit crunch means that there’s only so much capital to go around. “Bankers are telling their clients to pull companies,” a mid-market deal pro told Buyouts. “There really is no senior debt capacity.”