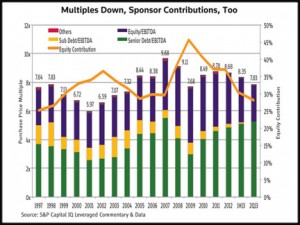 Overall, pricing on LBO deals in the second quarter declined to 7.83x EBITDA, according to LCD, a unit of Standard & Poor’s Financial Services LLC. At the same time, sponsors’ equity contribution dropped to 29.58 percent of the deal value.

Put another way, sponsor contributions amounted to 2.55x turns of EBITDA in the second quarter. If that were to persist for the full year, it would represent the cheapest market for LBO deals since the recession year of 2001, LCD’s historical data showed.

The data also showed the continuing decline in the use of subordinated debt as low interest rates have persisted. Sub debt contributed essentially zero to purchase price multiples in the second quarter, LCD reported. LCD did not break out detailed performance for the middle market in this report. A spokesman said the agency didn’t have enough observations to provide meaningful results. Use of mezz financing is greater in the middle market and lower middle market, rather than the large-market deals that dominate the LCD findings. LCD defines the mid-market as companies with less than $50 million of EBITDA.

The second quarter marked a time of sluggish dealflow and economic uncertainty. Sister service Thomson Reuters Loan Pricing Corp. reported that “lack of supply” was the biggest obstacle for mid-market lenders to get deals done in the period, based on a survey of lenders. Much of the reason given in the sponsor community was that much of the first half’s activity had been pulled into the fourth quarter of 2012, due to tax considerations related to the year-end “fiscal cliff.”

Another factor was the disruption to credit markets that occurred mid-quarter. It was May 22 when Ben Bernanke, the chairman of the Federal Reserve Board, testified to Congress that the central bank anticipated tapering its purchases of debt in the open market later in the year. Interest rates briefly spiked, although they have leveled off since then.

More than 72 percent of respondents in the LPC lender survey said the market volatility had required mid-market deals to sweeten their terms in order to complete sponsor-backed transactions (the level of pushback was less for non-sponsored deals). No one, however, accepted the proposition that volatility was causing mid-market deals to “struggle to get done.”