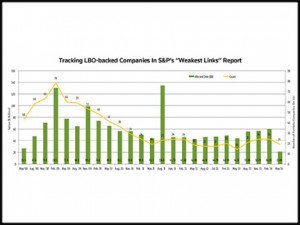 The number of ”weakest links,” both sponsored and non-sponsored around the world, dropped to a nine-month low in S&P’s latest report published on May 30. The most recent report lists 136 entities with a total rated debt worth approximately $208 billion. Last time Buyouts reviewed the report published February 28, it contained 152 companies with debt of approximately $258 billion.

The 19 portfolio companies in the most recent report have an aggregate debt of $21.49 billion. The number of private equity-backed companies identified in the report published February 28 was 24 with a combined debt of more than $60 billion.

S&P includes entities on the ”weakest links” list if they have a speculative corporate credit rating of ‘B-‘ or lower; plus a negative outlook, a CreditWatch with negative implications, or both.

Based on the overall number of ”weakest links” companies, the media and entertainment sector is the most vulnerable to default and makes up almost 20 percent of the total, with 27 companies listed. Similarly, consumer products and metals, mining and steel sectors have the next largest number of ”weakest links” with 11 each, or just more than eight percent respectively. However, when looking only at companies identified as private equity-backed, the healthcare sector runs the greatest risk of default, with four of the 19 companies listed (21 percent). Retail/restaurants and media and entertainment sectors come in second with three companies each, or approximately 16 percent apiece.

Additions and Subtractions
Since the last time Buyouts reviewed ”weakest links,” three new portfolio companies were added to the list while eight were taken out.

The largest firm to be added to the list over the past three months with $875 million of affected debt was Expert Global Solutions LLC whose ‘B-‘ rating was placed on CreditWatch with negative implications. The One Equity Partners LLC-backed company witnessed cash flows decrease drastically in the second half of 2013 and is at risk of breaching the maximum leverage covenant on its senior secured debt. The negate implication of CreditWatch is due to the possible ratings downgrade on the company during the covenant waiver period.

As a result of signification deterioration in performance throughout last year due to declining traffic, California Pizza Kitchen Inc’s corporate credit rating was downgraded to ‘B-‘ from ‘B’ as profitability is expected to remain weak. The Golden Gate Capital-backed pizza company also was given a negative outlook as performance is expected to continue declining. Similarly, Avista Capital Holdings LP‘s Sidewinder Drilling Inc received a negative outlook on their ‘B-‘ rating as liquidity will remain a concern unless profitability improves.

Of the eight portfolio companies that were removed, two defaulted, one had its ratings withdrawn and five had their outlook revised to either stable or positive.

Based on a stronger than expected fourth quarter, healthcare information technology provider TriZetto Corp had the outlook on its ‘B-‘ corporate credit rating revised to positive. The Apax Partners LLP-backed company reported strong cash flows and improved liquidity. TriZetto Corp is expected to continue achieving stable to positive revenue and earnings over the next 12 months.

Spanish global leisure park operator Parques Reunidos Servicios Centrales S.A.U. had the outlook on its ‘B-‘ rating revised to stable from negative as operating performance in Europe will continue to stabilize and improve through the year. The stable outlook on Arle Capital LLP-backed company reflects expected modest EBITDA growth.

Standard & Poor’s raised its long-term corporate credit rating on Greece-based glass container manufacturer Yioula Glassworks SA to ‘CCC-’ from ‘CC’ and placed it on CreditWatch with positive implications. The upgrade reflects the group’s extension of its 28 million euro ($38 million) bank commitment with Eurobank Ergasias from June 2014 to June 2015. Simultaneously, the positive CreditWatch placement is due to an expected announcement that the Global Investment Financing SA-backed company will refinance its existing 140 million euro senior unsecured notes in the near term.

Through the end of May, four private equity-backed companies have defaulted and received either a ‘D’ of ‘SD’ rating from S&P.

For the second time since 2011, Sbarro LLC has filed for Chapter 11 bankruptcy protection, resulting in S&P lowering its corporate credit rating to ‘D’ from ‘CCC-‘. Due to the very competitive environment in the fast food industry, declining retail traffic in shopping malls and increased commodity costs, the MidOcean Partners LLC-backed pizza retailer has taken a large hit to both its liquidity and profitability. The Chapter 11 filing lists the company as having $175.4 million in assets and $165.2 million in liabilities.

Due to another Chapter 11 filing, Energy Future Holdings Corp. had its corporate credit rating lowered to ‘D’ from ‘CC’ on itself and its subsidiaries. The company filed for bankruptcy protection as a result of its subsidiary Texas Competitive Electric Holdings Co LLC being unable to meet financial obligations that were upcoming due to insufficient cash flow generation. The electric utility holding company is backed by Kohlberg Kravis Roberts & Co, TPG Capital and Goldman Sachs & Co. In its court filings, Energy Future Holdings Corp listed $36.5 billion in assets and $49.7 billion in liabilities.