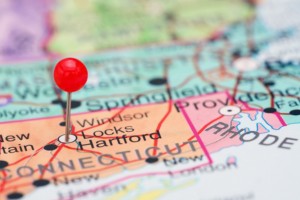 The Connecticut Retirement Plans and Trust Funds’ early investments in private equity are dragging its portfolio’s returns into the single digits, according to a recent report Buyouts obtained through a public records request.

Connecticut began investing in private equity in 1987, but poor manager selection and large commitments before periods of market turmoil caused the portfolio to fall well short of its benchmarks, said the report, prepared by consultant Franklin Park Associates.

The $29.7 billion pension system’s private equity portfolio netted a 9.1 percent internal rate of return since inception as of June 30, according to the report. Its public market benchmark, the S&P 500 plus 500 basis points, netted 11.4 percent as of the same date.

Franklin Park attributes the underperformance to a portfolio of 41 funds from 1999 or earlier. Those holdings, which include 16 funds held at or below cost, netted a combined 7.9 percent through June 30, 2015. The state treasurer who directed many of those commitments, Paul Silvester, was sentenced to 51 months in jail for involvement in a PE pay-to-play scandal in 2003.

Connecticut’s performance began to improve after current State Treasurer Denise Nappier assumed control of the portfolio in 1999. The pension system did not commit to any private equity funds in 2000 or 2001 and its post-2002 portfolio, comprised of 51 fund commitments, netted 12.3 percent through mid-2015. 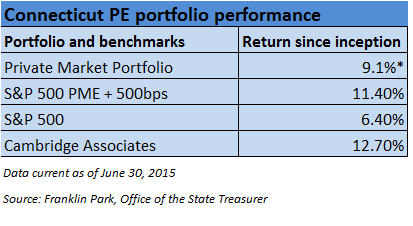 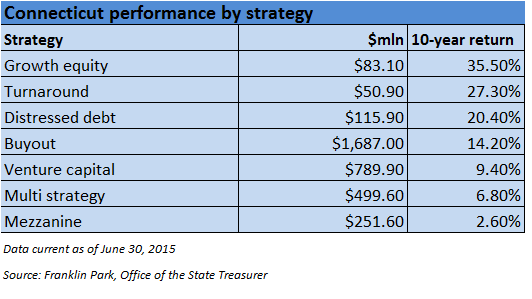 Even under Nappier, however, returns failed to meet certain performance benchmarks. Connecticut measures its performance in individual vintage years against a Cambridge Associates benchmark. Since the turn of the century, Connecticut only cleared the Cambridge benchmark twice: in 2002 and 2004, when it netted gains of 2.3x and 2.2x, respectively.

Nappier’s office did not respond to requests for comment.

The timing of certain commitments likely hamstrung the portfolio’s post-2002 returns. Roughly a quarter of Connecticut’s existing exposure falls in 2005 and 2006 funds, which Cambridge Associates marks as two of the three weakest performing vintages of the last decade.

Connecticut grew increasingly selective following the global financial crisis. After committing roughly $1.7 billion to private equity in the three years leading up to the 2008 collapse, Nappier allocated a little more than $1 billion to the asset class between 2011 and 2014, the Franklin Park report said.

Commitments from the latter period include allocations to strong performers like Vista Equity Partners’ Fund IV, which netted a 21.5 percent through March 31, as well as Clearlake Capital Group’s Fund III, which netted 28.5 perecent as of the same date, according to Franklin Park.

Terrence Purcell, who led Connecticut’s private equity program from 2012 to 2015, left in July. It is unclear if the retirement system has found a replacement.

The Teachers’ and State Employees’ funds were slightly below their 11 percent target for private equity as of November 30, according to pension system documents. The Municipal Employees fund was roughly 1 percentage point above its 10 percent target allocation to the asset class.