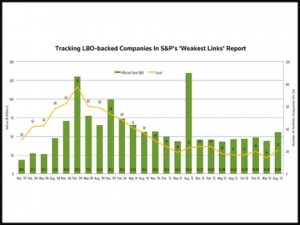 Continuing a trend in evidence since December 2012, the number of global companies on S&P’s ‘Weakest Links’ declined further over the summer. The latest monthly report, entitled ‘Global Weakest Links And Default Rates: Weakest Links Count Increased in August,’ examines ratings issued by the agency through August 26.

In order to be included in the list, an entity must have a speculative corporate credit rating of ‘B-‘ or lower, plus a negative outlook, a CreditWatch with a negative implication, or both.

The September 4 report lists 130 companies with a total rated debt valued at $206.7 billion as of August 26. The 22 private equity-backed portfolio companies included in the list have an aggregated debt of $56 billion, by Buyouts estimates. When examined by sector, 27 percent of portfolio companies on the list are media and entertainment firms, followed by high technology and retail/restaurants with 18 and 14 percent respectively. From a geographic point of view, the United States disproportionately dominates the roll with 18 of the 22 (82 percent) PE-backed companies domiciled there. By comparison, for the ‘Weakest Links’ report as a whole, the United States only accounted for two-thirds (68 percent) of the 130 global total.

Despite the number of global companies in the ‘Weakest Links’ falling further over the year, the number of PE-backed firms has increased since the last time Buyouts reviewed S&P’s report. On July 1, the number of portfolio companies was at its lowest point since Buyouts first started tracking ‘Weakest Links,’ with only 14 firms making the list. The new uptick in the number of firms on the list also increases the aggregate value of LBO-backed companies’ debt by over $12 billion from the $44 billion last reported. Despite the recent uptick, the small proportion of PE-backed firms on the ‘Weakest Link’ list is indicative of an improving economy and suggests the ability of financial sponsors to effectively manage the cash flow of portfolio companies.

Over the summer, seven new portfolio companies joined the ‘Weakest Links’ list and an additional four have been included as revisions to earlier Buyouts reports. Simultaneously, three PE-backed firms left.

The company that added the most debt to the ‘Weakest Links’ tally was Affinion Group Holdings Inc, with $2.685 billion of affected debt. The Stamford, Connecticut-based direct marketer of membership, insurance and credit card ancillary services was downgraded by S&P to ‘CCC+’ from ‘B-‘ as a result of its elevated leverage and risk of further declines in operating performance. The ratings agency also issued a negative outlook over concerns that the General Atlantic LLC-backed company will not be able to refinance its senior notes.

Another company that was downgraded from ‘B-‘ to ‘CCC+’ was Melville, New York-based Sbarro LLC. The ratings for the Italian quick service restaurant were revised due its unsustainable financial burden over the long term, S&P said. Backed by MidOcean Partners LLC, Sbarro was also issued a negative outlook as S&P believes that the company will continue to experience deteriorating performance, which may lead to weaker credit protection measures and liquidity erosion.

Excluded from the latest report is the U.S. dental practice management services provider Smile Brands Group Inc. The Welsh Carson Anderson & Stowe–backed firm is planning to refinance its bank debt and pay down existing revolver borrowings. The ratings agency reaffirmed its ‘B-‘ corporate credit rating and revised its outlook to stable as the company’s liquidity is expected to be adequate in the near term. The issuance of a stable outlook puts the company outside the definition of ‘Weakest Links’ despite the ‘B-‘ rating.

Another firm that was dropped from the ‘Weakest Links’ list is Diamond Castle Holdings Inc-backed Community Choice Financial Inc. The consumer finance company had its outlook revised to stable from negative and its rating affirmed by S&P on July 18. The new outlook reflects the rating agency’s view that CCFI reduced its near-term legislative risk in Ohio by changing its products offerings in the state. The company is expected to effectively manage legislative risks in Ohio and maintain adequate cash flow and liquidity.

As a result of improvements in credit markets, there has been a general decline in default rates since 2010. However, recovery has not been uniform across sectors as transportation, leisure/media and energy sectors continue to have higher default rates due to their cyclical nature. Through August 26, there have been 55 global corporate defaults accounting for $77.7 billion of debt. This figure is lower than the same time period last year when 85 companies received a ‘D’ or ‘SD’ designation by S&P with $86.7 billion of debt and a far cry from the 264 defaults witnessed at the height of the financial crisis in 2009.

Of the 55 companies defaulting so far in 2013, only five have been LBO-backed, accounting for approximately $41.8 billion of affected debt. In addition to Orchard Supply Hardware (Buyouts July 1) only Jacuzzi Brands Corp was included on S&P’s global corporate defaulters list since its June 3 report.

The U.S.-based global producer of branded bath and plumbing products was downgraded from ‘CCC’ to ‘SD’ on July 18. Jacuzzi Brands Corp is backed by Apollo Global Management, Ares Management and Clearlake Capital Group and the firm recently refinanced approximately $230 million in debt for new debt and equity interests in a transaction that is considered to be a distressed exchange tantamount to default by the ratings agency.