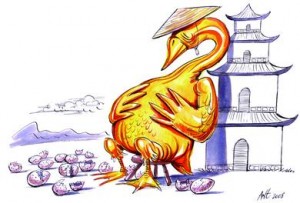 China is often seen as the golden goose for private equity. Recently, China’s head of financial affairs at the National Development and Reform commission met with private equity groups including: TPG Capital, Blackstone and Goldman Sachs to highlight China’s willingness to develop its private equity markets. Around 12 new state-backed Chinese private equity funds have been launched with a combined investment pot of US$10bn. The idea of co-investment in infrastructure projects alongside the Chinese Authority must be attractive. But behind the courtship and glad handing private equity players in the region expect exit multiples on portfolio companies to shrink as market uncertainty looms.

The only country in the region that seems immune (for the time being) to the credit crunch is India. Its private equity invest record has remained almost identical to 2007 for the first nine months of the year. When this performance is contrasted with corresponding Western European and US figures, the difference is stark. India is facing a talent shortage, of the countries 500,000 annual engineering graduates only 25% are suitable for employment, according to a Nasscom survey.

Japan is still a bright spot for private equity as international firms such as Bain, KKR, Permira, Advent and TPG have set up offices in Tokyo. The country also has an exciting venture capital story to tell as dramatic shifts in the Japanese pharmaceutical market have opened the door to venture capitalists. So far this year a total of US$17.1bn in 13 outbound pharma M&A deals has been registered, a national record.

Australia, taken in context, is suffering less in the credit crunch than the UK or US. According to the Australian Venture Capital Association, there has not been much change in the number of completed deals in the mid-market. Having posted budget surpluses in for each of the past ten years (except 2001), the Australian government has capitalised on the exceptional demand for minerals, from an influx of worker from Asia and from the healthy banking system. This should leave Australia with a relatively softer landing compared with Western economies.

It isn’t all golden sunshine investing in Asia. Private equity players that have watched the five-year Lone Star/KEB saga unfold know all too well the political risks associated with investing in certain Asian countries. Foreign investment in South Korea has fallen for three year in succession. Despite a change in the country’s government with more pro-Western President Lee Myung-bak winning power in early 2008, Lone Star has continued to face harassment and delays.