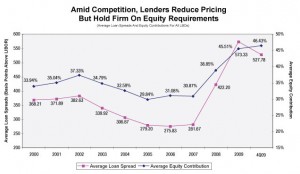 If the debt markets truly are rebounding, it’s not apparent in the size of the equity checks being cut for some of the most recent take-private deals.

Lenders are emerging from the sidelines, and the increased competition is whittling down loan spreads. But the sponsors lining up the largest transactions of the day are still paying for about half of their respective deals with equity, just as at the peak of the credit crisis.

Case in point: When signed up last month to delist CKE Restaurants Inc., owner of the Hardee’s quick-service restaurant chains, it agreed to pay for about 48.0 percent of the $928 million deal with equity. Aside from being a historically high figure, the $444 million equity check is also north of the average 45.5 percent equity contribution paid for LBOs throughout 2009, according to Standard & Poor’s Leveraged Commentary & Data.

“The lenders that are out there competing for deals are trying to get more aggressive, but when they get back to their credit committees, there’s still a lot of pushback,” said Mark K. Gertzof, a managing director at debt advisory shop Monroe Credit Advisors. “The institutional memory is still pretty strong.”

New York buyout shop will tap its second fund to pay for 54 percent of the $635 million take-private of Infogroup Inc., a provider of business marketing solutions, while a consortium made up of , and agreed last month to cover 45 percent of the $1.1 billion needed to delist electronic education services provider Skillsoft.

Despite the growing number of lenders coming back to market, “There are not a lot of people out there saying they’re willing to give up on equity contributions,” Gertzof said.

What they are willing to give up on is pricing. In the fourth quarter of 2009, overall loan spreads dipped to an average of about 528 bps, below the full-year average of 573 bps. Anecdotal evidence has pricing even lower today. According to Gertzof, senior cash flow loans that three to six months ago were L+ 550 bps with a 2 percent Libor floor are today available at in the L+ 400-450 bps range with a 1.5 percent Libor floor.

By contrast, the average 46.4 percent equity contribution in the fourth quarter 2009 was actually higher than the full-year average of 45.5 percent, according to S&P LCD, indicating that it could be some time until those figures start to trend downward.