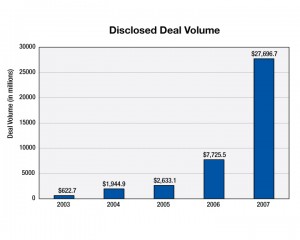 At a time when many U.S. private equity firms are looking to open offices in Asia, they may also have to guard their home turf as LBO firms from the Old World are crossing the Atlantic in greater numbers to set up shop here.

Within the last month, U.K.-based private equity stalwarts and announced plans to establish New York outposts. They will join , and , all of which opened offices in New York within the past few years. Those offices once served mainly as a support system for European firms’ U.S.-based portfolio companies, but now they are now charged with the task of sourcing deals in North America.

For the most part, the European shops that can afford to make the move are the mega-firms. BC Partners, CVC Capital Partners and Permira are roughly the Continental equivalents of America-based players like , and . Consequently, U.S. mega-firms will be feeling the pinch the most, at a time when they’re already facing increased competition from strategic buyers and feeling less love from lenders. The European firms, on the other hand, stand to benefit from current U.S. economic conditions, namely the weak dollar and the reduced valuations of target companies that will likely result from the credit crunch. But the rivalry began even before the credit crunch.

In 2006, for example, Permira paid $765 million to acquire Indianapolis, Ind.-based Aearo Technologies Inc., a manufacturer of earplugs and eye-protection devices. It beat out a few U.S. buyout shops in the process, including LBO firms and . The deal was Permira’s largest in the United States so far, and last year the British buyout firm sold the company to technology giant 3M for $1.2 billion. In another U.S. deal last year, CVC Capital Partners paid $1.7 billion for Mansfield, Mass.-based Samsonite Corp., 85 percent of which was owned by , Bain Capital and , an arm of the . And during a recent forum on mid-market buyouts at Columbia Business School, Daniel Collin, a partner at New York buyout firm , reported seeing increased compeition from European private equity firms and strategic buyers.

The presence of these new offices underscores a deal trend that has been growing for at least five years: European firms are hungry for North American targets. For example, in 2003, European firms paid $622.7 million for a total of 23 U.S.-based companies, according to Thomson Financial, publisher of Buyouts. Last year, that number grew to $27.7 billion for 63 U.S. targets.

The scenario is not exactly comparable to when U.S. buyout shops began opening their doors across the Atlantic several years back, when private equity was still a relatively new industry there. In North America, there’s not much room to grow. “When the U.S. firms went to Europe they grew the market and the capital available for buyouts in Europe proportionately more than could a group of good [European] firms now coming to the U.S., which is already a large buyout market. So they’re going to have a smaller impact, but they’ll have an impact,” said Harold Bogle, a managing director at Credit Suisse Group and head of the firm’s global financial sponsors unit.

While the U.S. economy happens to be favorable to European firms at the moment, that did not drive their decision to expand. The push to get a toehold here was years in the making. “They recognize the U.S. as being a large, continuously fertile area for buyouts. They have the skill set and they want to have a global business,” said Bogle. To have a global reach, many buyout pros would agree, a firm must have a presence in Europe, North America and Asia, which often translates into Hong Kong, London and New York.

That strategy has worked well for British-based 3i Group, which opened a New York office in mid-2006. In 2007, the buyout firm closed four deals in North America, deploying roughly $750 million in equity. The transactions included growth capital investments in Bermuda-based hedge fund administrator Fulcrum Ltd. and in Mold-Masters, a privately held Canadian manufacturer of hot runner systems for the plastic injection and molding industries. It is unlikely those deals would have happened without a U.S. presence, said 3i Partner Ken Hanau.

The way Hanau sees it, to be successful in the ultra-competitive private equity business, you either have to be “niche-y, maybe within a sector or with a unique strategy, or you have to be large and global.” 3i already has a presence in Asia, and Hanau saids the firm’s reach is a selling point both for limited partners who prefer a sophisticated firm and for potential targets looking to expand their operations. “I’m seeing it firsthand. The model of this international footprint is absolutely working,” Hanau said.

For some industry watchers, the growing presence of European buyout shingles on U.S. soil represents a turning point. “We’ve always been accustomed to the U.S. going abroad, but I think this is indicative that Europe has established itself as a stand-alone PE market. And they have their own global agenda that’s not always second to the U.S. agenda,” said Brian Korb, a partner at Glocap Search, an executive recruiting firm that specializes in private equity, investment banking and hedge funds. Korb said he has seen an uptick in his business from European firms looking to staff up their new outposts.