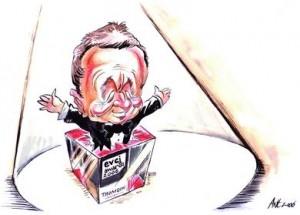 Alas, award season is upon us – again. And we will all have a chance to congratulate ourselves and drink too much at the EVCJ Awards on 31 January, 2007 at the Dorchester Hotel in London. As this year is our first to have a black tie dinner, we’ve arranged a very special host – one of Britain’s sharpest impressionists – Rory Bremner. All of the proceeds from the event will be donated to Save the Children, so we hope that you will join us for some good food and good fun on the night.

At EVCJ, we don’t just give awards, we also receive them. Tom Allchorne, our associate editor picked up a gong at the seventh annual BVCA Private Equity & Venture Capital Journalist of the Year Awards. Allchorne won a prize for his article on European venture capital ‘Hitting the fundraising trail’. The piece concerned the way in which venture capital funds are differentiating themselves in order to appeal to investors in such a competitive fundraising market.

Allchorne, who has been on the EVCJ team since March 2004, was also awarded the journalist of the year award in 2004. Allchorne was nominated twice at this year’s awards, with his article on university spin-outs, entitled ‘Pomp and circumstances have changed’, shortlisted in the Specialist category. Other EVCJ staffers nominated for their articles were Lisa Bushrod and Angela Sormani. Bushrod’s piece, ‘PE is waking up to IR’, ran in the April 2006 issue, and concerned the growing importance of investor relations in the private equity world. Angela’s contribution, ‘KKR opens public market floodgates’, was an analysis of the US buyout giant’s listed fund and the implications it would have on the future of fundraising. We were also given special mention for our redesign. The BVCA’s Journalists of the Year Awards 2006 took place on November 29 at the Crowne Plaza London, St James Hotel, and was hosted by Nick Robinson, the BBC’s Political Editor.