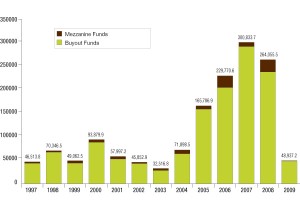 As bad as fundraising totals for the first two quarters seemed at the time, third-quarter results were even worse. U.S. buyout and mezzanine funds collected a mere $12.8 billion for the quarter, down from the roughly $18 billion raised in each of the two previous quarters. The $48.9 billion gathered in the first three quarters of 2009, of which $48.2 billion went to buyout funds and $784.4 million went to mezzanine vehicles, pales beside the $230.8 billion raised in the first nine months of 2008.

If the current fundraising pace continues, buyout and mezzanine funds will rack up an annual total of roughly $65 billion, falling somewhere between the $33 billion raised in 2003 and the $72 billion assembled in 2004. In comparison, the industry amassed roughly $300 billion in 2007 and $264 billion in 2008. Our fundraising totals reflect capital raised by U.S. buyout and mezzanine firms for LBOs, real estate, infrastructure, distressed-debt control and related strategies, regardless of the location of the transactions.

Several developments have paralyzed limited partners, putting the kibosh on commitments. “The fundraising train crept to a halt in the second half of last year and has only continued its deceleration because of the very few, if any, transactions in the marketplace,” said Dan Vene, a senior vice president with C.P. Eaton Partners, a Connecticut-based placement agency. One upshot of a the slow deal pace has been that general partners haven’t been running through their funds as quickly as in previous cycles. Another is that LPs have received very little in the way of capital distributions with which to make new commitments, even if they wanted to. Meantime, the stock market still has a ways to recover before LPs get complete relief from the denominator effect that has many at or above their target allocations to private equity.

The biggest challenge for GPs raising money, said Hussein Khalifa, a partner at global placement agency MVision Private Equity Advisers, has been to get prior investors to re-up, particularly investors dealing with the denominator effect or disappointed with recent performance in the asset class. Without prior backers behind them, buyout shops have found it virtually impossible to get anyone else to commit. “There are no prizes for being a first mover,” Khalifa added.

One way to break through the impasse has been to be much more flexible on terms. According to Khalifa, “GPs are paying attention” to the LP-friendly terms wish list published in September by the Institutional Limited Partners Association, including a recommendation that 100 percent of transaction fees and related fee income go to the fund. “A lot of GPs have asked what [the list] means for them,” he said.

Another way GPs have coping has been to hold a series of small, rolling closings to take money off the table when they can, rather than waiting to have a large first closing. , . and are among the larger firms to have rolling closes recently. Smaller managers that have done so lately include , a Southlake, Texas-based private equity firm that is more than 85 percent of the way toward its fundraising goal. As of early August, Prophet Equity had raised $215 million toward its hard cap of $250 million, said a source familiar with the situation. The firm, which began raising its debut fund in July 2008, has held six closings so far, and intends to do two or three more in the next few months.

, a Denver-based private equity firm focused on the small and middle-markets that raised $235 million for its second fund, also had multiple closings, which, according to managing director Peter Calamari, showed that the firm had momentum.

Of course, no matter how bad the fundraising market gets some firms manage to buck the trend. San Francisco-based has already raised $6 billion, all of it this year, for , which has a target of $7 billion and a hard cap of $10 billion. The firm, which last year scored big on its sale of DoubleClick to Google, intends to use the capital for equity-related investments of $300 million to $1.5 billion, mostly in the United States and Europe. Very attractive returns explain the firm’s popularity. Its Fund V, according to performance data from , had generated a net IRR of 30.4 percent as of Dec. 31, 2008.

nabbed an additional $800 million for , a fund that closed in 2007 with $1.2 billion. is earmarked for investments in turnarounds, restructurings, bankruptcies and other special situations. Though the effort was ultimately capped at $800 million, KPS Capital received subscription requests of more than $1.3 billion for the supplemental fund. The money was raised to take advantage of the “unprecedented level of distressed opportunities in the current environment with limited competition from other financial firms,” according to a board document from the .

New York-based , established in early 2008 by former partner Mark McGoldrick, closed its debut fund this summer with about $2.5 billion, an impressive sum though only half of its $5 billion target. The firm, with an office of 10 investment professionals in Hong Kong, plans to do $100 million deals in China and India. The star quality of McGoldrick, known in the industry as “Goldfinger” for his earning skills, seems to have given the firm the impetus needed to draw pledges. Goldman Sachs served as placement agent for the firm. Limited partners in the fund include , the Singapore state investment company; ; and Goldman Sachs.

In September, held the final close for at $1.1 billion, earmarked for opportunities in stressed and distressed loans, bonds and other investments. Interest in the fund exceeded the firm’s initial target of $750 million by more than 50 percent, Oak Hill Advisors said in a statement. The fund was formed in March 2008 and began investing in October 2008. The amount of distressed debt skyrocketed in 2008 in the wake of a global economic downturn and credit crisis.

Energy funds got a lot of attention from LPs in the third quarter, taking in another $3.2 billion to bring the year-to-date tally to $6.3 billion.

The trend seems to be driven by many of the largest pension funds. According to MVision’s Khalifa, investors seem to be gravitating to real asssets that can generate a reliable current income stream, and whose monetization isn’t subject to the vagaries of the M&A market.

’s second fund seems to be propelled by rocket fuel. Since its launch in December, the firm has raised $1.5 billion, and the target is up to $3.5 billion. The buyout fund, earmarked for investments in North American energy infrastructure, mainly in the power generation, renewable energy, electric transmission and midstream gas sectors, has garnered pledges from some of the biggest pension fund players around. The and the both recently committed $100 million each to . The pledged $50 million in May.

Short Hills, N.J.-based Energy Capital closed its debut fund in 2006 with $2.25 billion. According to CalSTRS data, the IRR of Fund I, as of March 31, 2009, was 13.61 percent. The committed up to a $75 million to in 2006 and recently pledged $40 million to Fund II. The LP noted in its board documents in 2006 that the first-time fund was formed by a seasoned team with a demonstrated track record. Doug Kimmelman, Scott Helm and Thomas Lane, all formerly of Goldman Sachs, created Energy Capital Partners in 2005.

In late July, closed with capital commitments of $820 million. The initial target when the firm began fundraising last summer was about $1.6 billion. LPs include the , and the . Roughly two-thirds of the LPs in the fund were re-ups. The firm’s previous energy vehicle, closed in late 2006 at $950 million. Fund V is eamarked for investments in early- to mid-stage North American oil and gas businesses with attractive business plans but that—because of size, stage of development, or a historical problem—can’t get that capital from traditional sources.

has collected more than $800 million from LPs and in May was fast approaching its $1 billion target for its debut fund. The firm focuses on late-stage investing in renewable power, alternative fuels, energy efficiency and storage. The Teaneck, N.J.-based firm was founded by Managing Partner Neil Auerbach in 2006. Prior to launching the firm, Aurebach was a partner at Goldman Sachs, where he co-founded its U.S. alternative energy investment business. Although Hudson Clean Energy Partners will usually seek control-stake transactions, it will also make minority-stake and venture capital plays. The firm invests in the United States and Europe. Danish pension fund has committed up to $400 million and the pledged at least $300 million.

, a New York City and Houston-based private equity firm, has raised more than $300 million toward its goal of $750 million for its debut fund, according to a July regulatory filing. Founded by former First Reserve Corp. president Ben Guill, the firm intends to focus on investments in mid-sized oil and gas exploration and production companies, energy infrastructure and companies that service the oil and gas industry. Thomas Edelman, the managing partner of White Deer Energy, earlier founded Patina Oil & Gas Corp. and served as its chairman and CEO from its formation in 1996 through its merger with Noble Energy, Inc. in 2005. The Indiana Public Employees’ Retirement Fund recently pledged $50 million to the new fund.