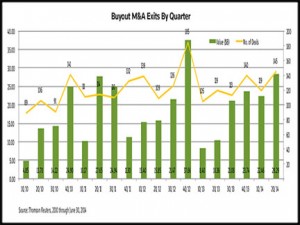 Thomson Reuters, the publisher of Buyouts Magazine, tracked 146 M&A exits involving U.S.-based financial sponsors in the second quarter of 2014. Of these transactions, 59 disclosed their financial terms for a combined total of approximately $28.29 billion. After the fourth quarter of 2012, when there were 185 deals on record with $37.66 billion in disclosed deal value, the latest figures represent the second strongest quarter of M&A activity since 2010 (see accompanying chart). Significantly, five of the M&A deals recorded over the last three months were valued at over $1 billion, with two deals coming in at over $2 billion and the average size of an M&A exit this quarter hitting $479.54 million.

The second quarter of 2014 witnessed a significant up-tick in the number of M&A exits over the second quarter of 2013 when there were 119 M&A transactions completed by U.S.-based financial sponsors. Similarly, the total disclosed value of Q2 2013 deals was well below the current amount, with only $10.36 billion.

The largest M&A deal to close over the past three months was the acquisition of Oriental Brewery Co Ltd, a South Korea-based producer of beer and liquor. The company was sold to Anheuser-Busch Inbev from Malt Holding Co Ltd, a wholly owned subsidiary of Silenus Holding BV, which is a 50-50 joint venture between Kohlberg Kravis Roberts & Co and Affinity Equity Partners Ltd, for KRW 6.17 trillion ($5.8 billion).

In another food and kindred products deal, the second largest M&A deal occurred on June 2 when Post Holdings Inc acquired Michael Foods Inc, a Minnetonka-based producer and wholesaler of eggs, from GS Capital Partners LP for $2.45 billion. The Goldman Sachs & Co subsidiary had been rumored to be seeking a buyer for Michael Foods Inc since December 2013.

For an estimated $1.65 billion, Vantiv Inc acquired Mercury Payment Systems Inc, a Durango-based provider of payment processing services, from Silver Lake Management LLC, which held 60 percent of the company, and other shareholders.

In a secondary buyout transaction, an investor group comprised of CCMP Capital Advisors LLC and the management of The Hillman Cos Inc acquired an undisclosed majority interest in The Hillman Cos from Oak Hill Capital Partners for $1.475 billion in cash. Oak Hill previously acquired the Cincinnati-based wholesaler of hardware products in May 2010 through a leveraged buyout transaction.

In a stock swap transaction, the final transaction over the $1 billion mark was the acquisition of the entire share capital of CanEra Energy Corp by Crescent Point Energy Corp from Riverstone Holdings LLC for CAN $1.114 billion ($1.01 billion). The sale of the Calgary-based oil and gas exploration and production company is comprised of $174.071 million in cash, the assumption of $315.503 million in liabilities and the issuance of 12.9 million Crescent common shares valued at $520.44 million. The shares were valued based on Crescent’s closing stock price of $40.374 on 22 April, the last full trading day prior to the announcement.

Over the past three months, at least 15 U.S. private equity-backed portfolio companies went public and the total value of their combined IPO size was almost $9.8 billion. The latest figure shows a significant up-tick in IPO activity from Q1 2014 when eight PE-backed companies made their public debut valued at $3.65 billion.

On April 10, Ally Financial, backed by Cerberus Capital Management LP and other undisclosed firms, went public under the ticker “ALLY“ on the NYSE at $25 per share. In the largest PE-backed IPO of the quarter the government bailed-out auto lender raised $2.375 billion and underwriters have valued the company at approximately $12.04 billion. During the financial crisis, the U.S. Treasury bailed out Ally Financial for $17.2 billion under the Troubled Asset Relief Program (TARP) and sold 95 million shares on offer while retaining 14.1 percent ownership in the firm.

Another significant public debut by a firm with U.S.-based financial sponsors was IMS Health Inc on April 4. The global information and technology services firm that focuses on the healthcare sector, backed by Goldman Sachs & Co, Leonard Green & Partners LP, TPG Capital Management LP and Canada Pension Plan Investment Board, raised $1.3 billion after its initial public offering was priced at $20 for the 65 million shares on offer. The stock is currently trading on the NYSE under the ticker symbol “IMS” and TPG Capital’s stake has been diluted to approximately 50 percent from the 62.2 percent before the initial offering, without underwriters exercising their full option.

The final PE-backed company to have an IPO in the second quarter valued at over $1 billion was Markit Ltd which is backed by General Atlantic LLC, Temasek Holdings (Private) Ltd, and Canada Pension Plan Investment Board. The financial information services company priced its initial public offering at $24 per share, resulting in a valuation of about $4.3 billion. The June 19 debut raised over $1.28 billion following the decision to enlarge the offering of 53.5 million shares. Trading on the Nasdaq under the symbol “MRKT”, Singapore state investor Temasek’s holdings in the company, through its wholly owned subsidiary Esta Investments Pte Ltd, was slightly cut back from a 10.47 percent stake to 10.38 percent.