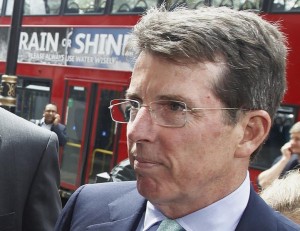 New York-based Atlas Merchant Capital, founded in 2013, has hired Lazard Freres & Co LLC as its placement agent for the effort, according to a Form D filed with the SEC on Jan. 5. The expected sales commission on the fund is $12.5 million, or 1.25 percent of the offering amount. The minimum investment for outside investors is $100,000. According to the Form D the firm has yet to sell any interests in the fund. Diamond did not return a phone call seeking comment by press time.

The firm plans to make principal investments in financial services companies based in the United States, Canada, Western Europe and Japan, according to its website.

Key executives listed as directers and promoters on the Form D include Diamond, 63, and David Schamis.

Diamond, founding partner and CEO of the firm, had previously been chief executive of London-based Barclays plc, where during a career that started in 1996 he helped build its investment bank into a leading bond underwriter. Diamond left under a cloud in 2012 after investigations found the bank had rigged LIBOR interest rates. U.S. and U.K. regulators fined Barclays 290 million pounds ($439 million) as a result.

Diamond is also a co-founder and non-executive director at Atlas Mara Co-Nvest Ltd, a company that raised $325 million in late 2013 on the London Stock Exchange to make financial-services investments in Africa.

Before joining Atlas Merchant Capital as a founding partner about a year ago, Schamis had been a managing director at J.C. Flowers & Co, another New York buyout shop that specializes in financial services. He had also been a director at MF Global Ltd, a brokerage led by former New Jersey Governor Jon Corzine that filed for bankruptcy in 2011. A Jan. 28 Bloomberg article about Schamis joining Atlas mentions Will McDonough, previously a wealth manager at Goldman Sachs, as another founding partner at the firm. But McDonough is no longer listed on the Atlas Merchant Capital website and isn’t mentioned in the Form D.

This past summer Crain’s New York Business reported that Atlas Merchant Capital had signed a lease for nearly 18,000 square feet on the 21st floor of the Seagram Building on Park Avenue in Manhattan.