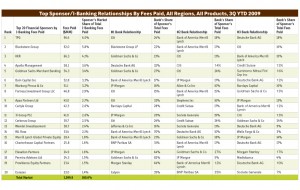 Investment banking fees paid out by buyout shops through the third quarter of 2009 have fallen by more than 50 percent compared to the same period a year ago, suggesting the LBO community is winning few new friends on Wall Street this year.

Total fees so far this year declined to about $1.6 billion, down from roughly $3.8 billion a year earlier.

Fort Worth, Texas-based remains the top fee-paying sponsor this year, having also held this position at the end of both the first quarter and second quarter of 2009. Year-to-date, the firm has paid a total of $96.4 million, according to Freeman & Co., the New York boutique advisory firm that generated the data in conjunction with Thomson Reuters, publisher of Buyouts. For comparison’s sake, TPG’s total would have ranked it in seventh place a year earlier.

is a close second, with $92 million in fees paid. The NYSE-listed firm moved up the ranking from last quarter. , ,meanwhile, dropped its ranking, coming in at number five with $54.3 million paid so far this year.

. was the top fee payer a year earlier with $176 million, but so far this year remains in seventh place, with $51.1 million.

The distribution of fees in 2009 remains solidly weighted toward the Americas, but not quite as much as in preceding periods. The region accounted for 69 percent of total fees paid by buyout shops, followed by the Europe, Middle East & Africa region with 24 percent, and Asia with 7 percent. During the first half of 2009, the Americas accounted for 71 percent of the total, the EMEA region represented 25 percent and Asia covered the remainder.

For the second quarter in a row, was the top fee earner. It collected $192.1 million through the third quarter of this year, up from $125.7 at the end of the second quarter. JP Morgan and Citi switched spots from their ranking last quarter. moved to second place with $142 million, followed by , which earned $138.5 million.

. and followed with $136.9 million and $128.1 million, respectively, in total fees earned from buyout shops through the third quarter of 2009.

Last year’s top fee earner, , remains in sixth place this year. The amount it earned so far this year fell to $73.5 million, a fraction of the $301.5 million it earned during the comparable period a year earlier.

In terms of fee distribution by product, M&A advisory represented more than a third of the fees generated from sponsors so far this year. It accounted for 36 percent of the total, a slight increase from the 34 percent it covered last quarter.

The debt capital markets took in 25 percent of the total so far this year, down from 26 percent at the end of the second quarter.

Syndicated loans covered 21 percent of the total year-to-date and equity capital markets accounted for the remaining 18 percent at the end of the third quarter. For more on the top fee-paying sponsors and the methodology used to gather the information, see the accompanying tables.