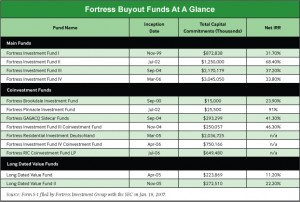 Fortress At A GlanceYear Founded: 1998

Though the tag “hedge fund manager” is commonly used to describe newly-public , it’s really a misnomer. Less than one-third of its assets under management actually fall under its hedge fund strategies. If you had to pick just one label for the firm, LBO shop might be more fitting.

Fortress—which earlier this month raised $634 million via an initial public offering and is now listed under the ticker symbol “FIG” on the NYSE—has been extremely active in the buyout market. Last year, Buyouts tracked five LBO transactions sponsored by the New York firm for a combined enterprise value of more than $4.98 billion. These deals include the $2.8 billion take-private of resort operator Intrawest Corp. on the larger end, and the $225 million carveout of Herald Media’s community newspaper division at the smaller end. Well over half of the firm’s assets under management fall under its control-stake acquisition strategy, suggesting that Fortress has in fact become the first control-style buyout firm to go public on a U.S. exchange.

Fortress does differentiate its longer-term buyout strategy from its more liquid hedge fund strategies. Profits from its buyout funds are returned to limited partners when investments are realized, generally over eight to ten years. Also typical of a buyout fund manager, Fortress earns 20 percent of the profits on each exit it makes from a buyout vehicle, so long as the firm is able to meet or outperform a predetermined hurdle for the fund as a whole. By comparison, the firm collects carried interest on its hedge funds either on a quarterly or yearly basis, depending on the vehicle.

Since launching its first buyout fund in 1999, Fortress has consummated 76 control-oriented investments in North America and Western Europe. And altogether, the firm has invested some $17.3 billion in buyouts, a full 58.2 percent of its total $29.7 billion of assets under management, according to the firm’s Form S-1 filed with the Securities and Exchange Commission. (Both Fortress and its attorneys declined to answer questions for this profile.)

Founded in 1998, Fortress has a series of flagship buyout funds that operate under the moniker “Fortress Investment Funds.” Its latest buyout vehicle is ., for which the firm raised about $3 billion in LP commitments last March. Fund IV is backed up by three co-investment funds, also managed by Fortress, that add an additional $2.1 billion of deployable equity capital, according to the S-1 filing. In all, its four primary buyout funds, as well as its series of co-investment funds, represent $11.4 billion in capital commitments from institutional and wealthy investors.

In addition to its primary and co-investment funds, Fortress’s buyout arsenal also includes two smaller “Long Dated Value” funds earmarked for fuelling purchases of “undervalued assets with long-dated cash flows.” Through these funds, Fortress buys businesses that may be undervalued due to a lack of current cash flows or because they are encumbered by a long-term lease or financing, but that could provide for “significant capital appreciation over the long term.”

The Fortress Investment Funds are overseen by CEO Wesley Edens, along with President and Director Robert Kauffman and COO and Director Randal Nardone. Prior to the IPO, these three principals, along with Peter Briger and Michael Novogratz—both Fortress presidents and directors—owned 100 percent of the general partnership that had been Fortress Investment Group. Post-IPO, their combined stakes have been whittled down to approximately 77.7 percent of the firm’s Class A shares and 100 percent of its Class B shares.

As for returns, Fortress seeks to generate 20 percent annual net for investors in its buyout funds, and to distribute at least 2x invested capital back to investors. According to the S-1, these funds have outperformed those expectations, averaging annualized net returns of about 40 percent through Sept. 30 of last year.

And there appears to be billions of dollars more worth of returns just waiting to be harvested. Since 2004, Fortress has sponsored the IPOs of seven companies in its buyout portfolio, including jet aircraft leaser Aircastle Ltd. (NYSE:AYR); publishing company Gatehouse Media (NYSE:GHS); and real estate firm Mapeley Ltd. (LSE:MAY). Combined, these seven companies represented approximately $7.8 billion of “unrealized gains” based on their stock prices at the end of the year. Again according to Fortress’s S-1, these seven investments are “a significant source of potential additional revenues to us if and when such investments are realized.” Fortress claims that only one of its “significant investments” has ever lost money, with total losses from that deal representing less than 1 percent of total invested capital.

Of course, Fortress’s hedge fund business is a part of its story. It manages two hedge fund strategies, as well as two public investment vehicles. The firm introduced its hedge fund arm to investors in 2002, three years after its first buyout fund was raised. Its hedge funds fall into two categories: “hybrid hedge funds” and “liquid hedge funds.” Combined, these two strategies represent about $9.4 billion of Fortress’s total $29.7 billion of assets under management.

Briger oversees the hybrid hedge funds, which invest in an array of financial instruments, ranging from loans to pools of assets and receivables. Novogratz oversees the liquid hedge funds, which invest in global currencies, interest rates and equity and commodity markets, as well as their derivatives. From their 2002 inception up to Sept. 30, average net annualized returns achieved by the hybrid and liquid hedge funds weighed in at about 13.7 percent and 13.3 percent, respectively.

The remaining $3 billion of Fortress’s assets under management take the form of two publicly-traded investment vehicles—one in the United States and one in Europe—that invest primarily in real estate and real estate-related products. Introduced in 2002, Fortress calls these “Castles.” Edens manages the United States arm while Managing Director Kenneth Riis manages the one in Europe. The average net annualized returns posted by these vehicles is the most impressive of all, clocking in at 51.5 percent, says the S-1, measured from their respective IPOs in 2002 and 2004 through early this year.

Net income grew from $40.3 million for 2003 to $192.7 million for 2005. As a publicly-traded firm, Fortress said it will use its earnings to measure the value it creates each quarter, which in turn will determine the size of any dividends.

Investors apparently are happy with that arrangement, as shares of the firm, which priced at $18.50 a piece, opened for trading on Feb. 9, 2007 at $35.00 per share, an 89 percent premium. At press time, it had slipped to $28.90. Banc of America Securities, Citigroup, Deutsche Bank Securities, Goldman Sachs & Co. and Lehman Brothers served as underwriters.

About 22.3 percent of Fortress’s Class A shares are now held by third parties. Approximately 8.6 percent (34,286,000 shares) is now in the hands of public investors, while the remaining 13.7 percent (55,071,450 shares) is owned by the firm’s largest outside shareholder, Nomura Investment Managers U.S.A. Inc., which made an $888 million investment in Fortress on Jan 17.

The goal of Fortress is to become a “leading global alternative asset manager,” and to do it the firm said it needs four primary ingredients: people, permanence, capital and currency. In its regulatory documents, Fortress explained how the public offering will deliver those ingredients:

* By people, Fortress is referring to its own employees. According to the firm, being a publicly-traded entity allows it to provide financial incentives to its existing and future employees through the issuance of publicly-traded equity securities, which it called a “valuable additional compensation tool.”

* Permanence pertains to the firm’s ability to solidify its institutional presence. “Being a public alternative asset manager will benefit us as institutions and individuals increase the portion of the capital they allocate to us,” the firm noted.

* Capital from the IPO will help Fortress grow its business and create new products.

The IPO of Fortress, should its shares continue to trade higher, is likely to inspire other buyout shops to consider public offerings themselves. Already there is growing interest in tapping public equity markets for fresh investments. Last year both Kohlberg Kravis Roberts & Co. and Apollo Management launched publicly traded investment vehicles on the Euronext exchange. And earlier this month, The Carlyle Group’s Co-Founder David Rubenstein told BussinessWeek that other buyout firms of size—including his own—will one day be publicly-traded entities.

Indeed, the rush of buyout firms looking for ticker symbols of their own may come sooner rather than later—especially as more people recognize just how big a buyout player Fortress has become.