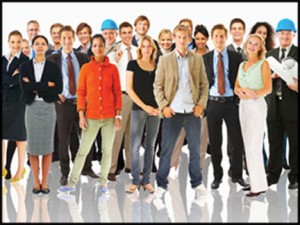 David Rubenstein, co-head of Carlyle Group, is wagering that a broader swath of investors does want access to the private equity club. In December, he predicted that within five years rules prohibiting most people from investing in private equity will be relaxed. “Eventually, non-accredited investors will be coming into private equity…through their 401(k) programs,” he said. “Why can’t not-so-wealthy investors get access to these vehicles? They need higher returns even more than the wealthy people.”

The overall amount of money invested by the middle class is massive, so it is easy to see why the private-equity industry is interested in tapping it. In 2011, assets held by 401(k)s plus the money held in individual retirement accounts (IRAs) amounted to $9.4 trillion, according to the Investment Company Institute. By contrast, buyout firms managed just $1.6 trillion worth of assets globally in 2012, according to Preqin, the private equity data provider. And individual investors—wealthy or otherwise—account for just a small fraction of that.

While the industry has long offered a few private-equity options to retail investors, such as listed funds of funds and business development companies (all of which are profiled later in this piece), Carlyle Group’s bold move signaled that the industry’s biggest players have been looking for new sources of capital from individual investors. How this move impacts small and medium-sized buyout firms is hard to gauge at this early stage. As a practical matter, buyout firms both large and small are likely to continue to restrict direct access to their funds to accredited investors, given the regulatory benefits of doing so.

One reason stands out for why some private-equity firms are moving to offer more options for individual investors: the decision by the industry’s biggest brands like Carlyle Group and Kohlberg Kravis Roberts & Co. to go public.

That change transformed most of these giant firms into diversified asset managers that seek to add fresh assets to boost management-fee income and smooth out the swings that can come with carried interest income. “Fees used to be there to keep the lights on,” said Donna Hitscherich, a professor at Columbia Business School. “But fees are now an important part of the equation. They’re a mainstay.”

The move down-market is also driven by the knowledge that assets from public pension funds, the single largest contributor to private equity, are not growing nearly as fast as the money that’s being added to defined contribution plans. But workers and retirees with 401(k)s don’t yet have access to alternative investments like their counterparts who have public and corporate pensions. “Is it fair that a 401(k) investor should only be able to invest in 10 Vanguard mutual funds?” asked Kevin Albert, a managing director at Pantheon Ventures, a funds-of-funds manager. “A better plan would include a mixture of alternative options,” he said.

So, now that Carlyle Group, KKR and other firms are opening their doors to ordinary investors, some have begun to ask whether it is wise for “average Joe” investors to sign up their limited retirement funds. Professor Hitscherich of Columbia said, “The hallmark of a good investment is one you understand.” But Hitscherich, who favors maintaining the accredited investor rule, said “private equity can be really difficult for even sophisticated investors to understand.”

“There is a possibility that this ends badly,” said Kelly Deponte, a partner at Probitas Partners, a placement agency. “You’ll have individual investors trying to make investment decisions in competition with sovereign wealth funds, pension funds and endowments. But small investors don’t have access to the same amount of information.”

Some also speculate that private equity could lose its cachet by going down-market. But George Siguler, a founding partner of Siguler Guff, a fund-of-funds manager, said such worries are overstated. “I don’t think we’ll be seeing any infomercials on TV about private equity,” he said.

Yet even as the big private-equity firms line up to offer products to ordinary investors, it is not yet clear whether those investors are keen to sign up, given the high expenses and potentially long lock-up periods. Here is a closer look at some of the main options for retail investors to invest in private equity today.

Carlyle Group’s new fund, CPG Carlyle Private Equity Fund LLC, which is open to investments of as little as $50,000, will still be limited to accredited investors. The structure of the new offering, which will be managed by Central Park Advisors, is essentially a fund of funds earmarked mainly for an array of Carlyle Group funds.

Just how many other firms are planning similar offerings is not known, but one thing is clear: Carlyle Group’s experiment is being closely watched by its peers.

As with most funds of funds, the new fund will have an additional layer of fees on top of the regular fees (1.5 percent management fee plus a 20 percent carry fee) charged by Carlyle Group’s underlying funds. Additional fees include a 1.8 percent annual management charged by the Central Park Group, 0.75 percent in expenses plus an up-front sales load of up to 3.5 percent, which altogether make investing in this fund an expensive proposition if one’s target returns are anything like 4 percent points above a plain-vanilla S&P 500 index fund.

“That’s one hell of a J-curve,” said Deponte of Probitas.

On the other hand, this is still one of the only options a retail investor has to invest directly in private-equity funds from a top-quality manager. High-net worth investors can, of course, be bundled into a pre-selected group of private-equity funds through a bank’s wealth management group.

One unique provision of the new fund is the ability for a limited number of investors to cash out after just two years—a liquidity option not available to most private-equity limited partners. On the other hand, the fund draws down all of its pledged capital immediately.

While these funds are available for U.S. investors, they are only traded on overseas exchanges, such as in London and Amsterdam. Two of the most prominent closed-end funds of funds are HarbourVest Global Private Equity and Pantheon International Participations. These funds almost always trade at a discount to the value of the underlying private-equity holdings. Some of the discounts are as much as 40 percent.

These firms are traded overseas primarily because of a restriction prohibiting U.S.-listed funds of funds from charging a carry of their own, something that is not prohibited in Europe.

For the retail investor, one of the obvious benefits of closed-end funds of funds is that they are easy to buy and sell. There are no lock-up periods, and distributions that are not paid out as dividends are recycled and invested in new private-equity funds. But there are downsides for investors. These offerings are somewhat thinly traded, and if everyone were to want to sell at the same time, they could be in for big losses. In addition, like many funds of funds, investors pay fees and additional carried interest to the sponsor. And that is in addition to the standard “2 and 20” fees that are paid to the sponsors of the underlying funds.

Another downside is that the funds are somewhat difficult to value, owing to the fact that the underlying assets (NAV) are only reported on a quarterly or monthly basis.

Buying stock in any one of the six main listed U.S. private-equity firms (Blackstone Group, Carlyle, KKR, Apollo Global Management, Oaktree Capital Management and Fortress Investment Group) is another way to invest in private equity, although this is likely to be more risky than investing in a private equity fund, since funds are diversified over several portfolio companies, whereas the stock of a firm is essentially a single asset. So while the value of a fund portfolio may rise and fall to a degree, the performance of a firm is dependent on management fees and carried interest, both of which can be severely impacted by the economic cycle.

After Blackstone Group went public at $35 a share in 2007, the stock lost nearly 90 percent of its value in the financial crisis, falling to below $4 a share in early 2009 (shares have since risen to $20.89 a share as of March 14). But while many of Blackstone Group’s private-equity funds suffered during the crisis, none lost anything close to 90 percent of their underlying value.

The financial crisis reminded the growing slate of publicly-listed private-equity firms of Wall Street’s desire for predictable earnings. As a result, these firms have been laser-focused on both diversifying and growing their base of assets.

Just six U.S. firms have gone public so far, depending on your definition of a private-equity firm, and the process of doing so is costly in time and resources. So far, no other firms have indicated they are eager to go public; in fact, two big firms, Bain Capital and Clayton, Dubilier & Rice, have said they intend to stay private.

But the diversification of these firms means that instead of buying just a firm’s private equity management skills, you are also buying other areas that are not related to private equity, such as real estate, distressed debt and hedge funds.

BDCs make loans to various private-equity portfolio companies, often with the benefit of a “kicker.”

For an individual investor investing in the 29 publicly listed BDCs, the main advantage of these funds are the dividends that typically range from 7 percent to 10 percent. Such firms typically pay out at least 90 percent of their interest income to investors in such dividends. But as these companies invest in companies that banks are often reluctant to lend to, there is a higher possibility that the firms being lent to will go bankrupt. At the same times, BDCs get the benefits of charging higher levels of interest.

Meantime, non-publicly traded BDCs, which share a number of characteristics with private-equity limited partnerships, including drawn-out fundraises, appear to be growing in popularity. They include CION Investment Corp., which is being advised by Apollo affiliate Apollo Investment Management, and FS Investment Corp., which is being advised by Blackstone Group’s GSO Capital Partners.To access non-traded BDCs, investors must only have incomes exceeding $70,000 along with a net worth of at least $70,000—what some refer to as the “mass affluent” in America.

Mainly, Siguler said, BDCs are good alternatives to high-yield debt funds. “But the model,” he said, “does not give you that much access to equity.”

While most of these firms are clearly more debt-oriented than private-equity sponsors, they have the advantage of being traded (and hence valued) on a daily basis. Typically, an investor will make two calculations when deciding to invest in a BDC. The first is an evaluation of the dividend payments, which can be substantial. The second is an evaluation of the potential of the stock price to appreciate.

Albert of Pantheon said that for the average investor, he favored private-equity vehicles that can be readily traded in the marketplace. BDCs, closed-end funds of funds and the common stock of private equity firms are all areas “where the market itself says, ‘this is what this is worth.’”