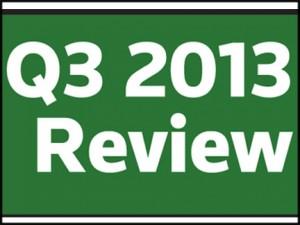 “My guess is we’ll see a pretty meaningful increase in total funds raised this year over last year,” said Jake Elmhirst, managing director and global co-head of the private funds group at UBS Investment Bank in New York. The UBS private funds group itself is on target to see some 13 client funds close on more than $10 billion this year between interim and final closes, he said.

All told U.S. buyout and mezzanine firms closed on $44.2 billion in the third quarter, bringing the year-to-date tally to $123.1 billion. That is slightly behind last year’s pace. But given the fund pipeline, don’t be surprised to see last year’s $160.7 billion tally eclipsed, which would make 2013 one of the five best fund-raising years on record, though well behind 2007’s $300.8 billion.

At the high end of the market, which typically sets the pace, Apollo Global Management, New York, has closed on the biggest sum of the year, at $8.4 billion, though still below its $12 billion target. The Carlyle Group of Washington, D.C. eclipsed the $10 billion mark on its sixth flagship fund, with more than half of that amount raised in 2013. Clayton, Dubilier & Rice, New York, has reached $2.7 billion on its latest fund, which sports a $5 billion target, while at press time Buyouts reported that Bain Capital, Boston, had reached $4.8 billion on its latest flagship fund. The firm is targeting $6 billion.

Institutional investors are doing their part to keep the fundraising market humming, according to placement agents. “One of the things that’s driving (demand) is that a lot of GPs have been focusing on exits,” said Kelly DePonte, managing director of placement agency Probitas Partners. “LPs are getting money back, which means they have room to deploy” more capital.

Indeed, despite the Oregon State Treasury being above its newly-raised 20 percent target allocation to private equity, Chief Investment Officer John D. Skjervem recently told Buyouts that he wouldn’t be surprised to “quickly find ourselves” below that target. The realizations have been “coming in fast and furious,” said Skjervem, who predicted that the state would continue to commit to new funds at a healthy clip, upwards of $2 billion per year.

Also fueling demand for private equity has been the dissipation of the capital overhang. In recent years limited partners have pointed to the vast amounts of capital committed but yet to be deployed as a reason to refrain from fresh commitments. But the 2005-2008 vintage-year funds, covering the four biggest fundraising years on record, are largely past their investment periods. A quicker pace of deal-making also is reducing the stockpile of dry powder.

“Investors are back and investing and have been pretty much doing so for the last 12 months from Labor Day 2012 until the present,” said Alan Pardee, managing partner of placement firm Mercury Capital Advisors. “US pension funds, endowments and foundations are definitely active and investing in funds. A number of the Canadian plans are busy, some on direct deals and others in blind pool funds. Investors in Scandinavia, the Netherlands, the UK, and to a degree Germany and Switzerland are very active, with Southern Europe understandably quiet. The sovereign wealth funds in the Middle East and in Asia have been very focused investors of late. The Japanese are back in the market and we have seen the entry of LPs in Latin America, particularly Chile, Colombia and Peru.”

So, what investment strategies resonate most with these investors?

Pointing to preliminary results from the firm’s annual investor survey, Probitas Partners’ DePonte said that U.S. mid-market buyout funds of $500 million to $2.5 billion are by far the most popular choice. Nearly two-thirds of respondents to the survey so far—63 percent—say that in 2014 they or their LP clients will focus most of their attention on that sector. Survey respondents could pick up to five sectors.

The thinking goes, said DePonte, that it is easier to improve the performance of small and mid-sized companies than it is large companies. And that should allow small and mid-market firms to sell their portfolio companies at higher exit multiples. “People think that’s the sector that is more likely to outperform,” said DePonte.

At press time a source close to The Riverside Co. said the firm, with offices in Cleveland and New York, was close to wrapping up its flagship Riverside Capital Appreciation Fund VI LP at its hard cap of $1.5 billion, comfortably above its $1 billion target. New York-based Sentinel Capital, another popular shop that launched its fifth core fund in the spring with a $1.1 billion target, closed at its hard cap of $1.3 billion this summer.

Among other mid-market funds to close in the quarter, Marlin Equity Partners hit the ball out of the park with a $1.6 billion final close of its Marlin Equity IV LP, well above its $1 billion target. The Hermosa Beach, Calif.-based shop tackles companies in need of a turnaround in such businesses as technology, business services, healthcare and manufacturing. Backers include New Mexico Educational Retirement Board. Catterton Partners of Greenwich, Conn. gathered $1.68 billion for its seventh consumer-focused fund, well ahead of its $1.2 billion target; the firm also raised $400 million for its second growth equity fund.

Olympus Partners, Stamford, Conn., hit $2.2 billion on its sixth flagship growth equity and buyout fund. That was short of its $2.5 billion target, although with the ability to recycle, the firm says it has $2.5 billion in investable capital. Backers include New York State Teachers’ Retirement System and Virginia Retirement System.

At the lower end of the middle market, Incline Equity Partners, a PNC spin-out, took in $301.1 million for its buyout fund, nicely ahead of its $250 million target. The Pittsburgh-based shop plans to pursue consolidations of businesses in value-added distribution, industrial services and specialized light manufacturing. Another next-generation firm, High Road Capital, closed in on its $300 million target by collecting $285.5 million for its High Road Capital Partners II LP. The firm was founded in 2007 by former executives of The Riverside Company. Meanwhile, Boston-based WestView Capital Partners hit its $430 million target on its third fund earmarked for growth equity and related deals of $10 million to $30 million each.

As ever the success of these and other fundraising hinges on sponsors continuing to put up strong return numbers.

According to UBS Investment Bank’s Elmhirst, over the last 10 years even median returns in private equity have outperformed the public equity markets.

“The spreads are quite significant,” he said. “I don’t see appetite for the asset class reducing in any way. I think it continues to increase.”