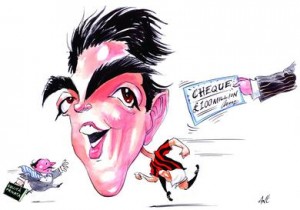 When everything around you is falling apart, when high-street stores you’ve known since childhood are no more, when your bank statements are in a shade of red you didn’t think existed, it’s always refreshing to turn to the world of football to escape reality, because it’s quite clear that paying over £100m for one player are the actions of someone not operating in the real world.

As good as Kaka is, paying the sort of price that could buy you your very own Premier League team, is staggering. Still, it’s not my money and this isn’t the place for a discussion on the effects that sort of money could have on football, but the financial state of Italian football – or AC Milan at any rate – is in stark contrast to the Italian private equity market.

Whilst Kaka snubbed the move, and AC Milan – through this month’s cover star, club president, and national prime minister, Silvio Berlusconi – welcoming his decision, Italian private equity firms would be falling over themselves to get their hands on that sort of money. As our feature which starts on page 36 reveals, whilst it initially looked to have escaped the worst of the banking fallout, the market was in fact just suffering from a delayed reaction.

On paper, 2008 didn’t look all that bad; there were large deals even in the latter half of the year, such as vending machine maker N&W Global Vending, but these were all in the LBO pipeline before the banking crisis hit in September.

Since then, the market’s been in a whole world of pain, not least of all Italian buyouts house Investitori Associati, which scrapped its fundraising efforts towards the end of last year. Investitori targets opportunities around the €100m mark – Kaka’s price range – but after the debt markets closed down and the economy headed south, the firm decided their time would be better spent looking after their portfolio than making any new investments.

Or at least that’s their version. The fact of the matter is that private equity investors all over the world are becoming massively selective in which GPs they back, and there’s no reason to think Italy would be immune from this, especially as the market there is one of the more junior ones compared with the UK, France and Germany.

What could save the Italian market, or at least keep it occupied as the market hits bottom and bounces back, is family-run businesses. Whereas buyout managers in other countries have, with a few notable exceptions, shied away from taking minority stakes, Italian firms are more than comfortable with such arrangements. Lots of private equity deals in Italy are with family-run businesses that don’t want to sell but need to raise capital, and with bank debt no longer available to them, more and more family businesses could be forced into the arms of private equity.

And if that doesn’t work, they could always find themselves a multi-billionaire. They don’t even have to be successful. Just ask Manchester City.