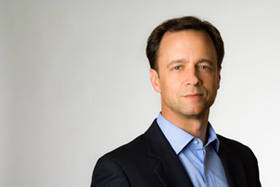 “I hear a lot of horror stories,” he said. “A lot of times PE guys come in and want to change the business, and that just didn’t happen here.”

Doxim, a Toronto-based software provider to the financial services industry, was looking for a large investor to help the company expand its product offerings and develop a customer base within the United States. After meeting with other firms, Doxim’s bankers introduced him to Strattam Capital.

Rasmussen was pleased to see Strattam’s approach was “not as all-knowing, but that they could learn something from the company. I think that measured approach is good for them, and good for people who are raising money. It’s really worked out great because it was collaborative.”

That collaborative approach is key to Strattam’s investment philosophy, said firm co-founder Robert Morse. Morse and fellow Oak Hill Capital Partners alum Adrian Polak launched Strattam in 2013 to invest in enterprise software and information technology businesses that are 15 to 20 years old. At that stage, company management teams should have a strong understanding of their products, Morse said.

Before it invests in a company, Strattam crafts an expansion strategy with the management team. Those strategies often call for new product lines, a broadening of customer relationships or acquiring complementary businesses.

That hybrid VC/PE approach is particularly applicable to the mid-level growth profile of the companies Strattam acquires. The firm targets businesses that are too slow-growth for venture capital backing, typically those with enterprise values between $20 million and $150 million, but too small to draw interest from larger private equity firms. Strattam looks to invest between $15 million and $50 million of equity per deal.

“There’s been a lot of attention shown to hyper-growth, late-stage investments,” Morse said. “We’re looking for a different profile. There’s an extremely large universe that doesn’t fit that profile, and we want to help these companies get to that point where they do fit that profile.”

Morse believes Strattam’s portfolio companies will benefit from corporations outsourcing information technology needs to software-as-a-service and cloud infrastructure service providers. In the past, corporations would internalize those functions by buying hardware or software and hiring staff to manage it.

That market trend, along with Strattam’s growth investment, should result in stronger portfolio companies that can be sold to strategic buyers at higher valuations, Morse said.

Limited partners are already voicing their support for the strategy, even before the firm holds a final close on its debut fund, which is targeting $350 million, according to an SEC filing last summer.

“We love the first two deals they’ve done,” said one Strattam LP. “It’s just confirmation of the expectations we had, that they’d be able to find great management teams that fit perfectly with the kinds of support Bob (Morse) and the team provide.”

Prior to launching Strattam, Morse spent 12 years as an executive on Oak Hill’s technology team, which he led from 2007 to 2013. While Morse spoke highly of his former firm – “I’m very grateful for my time and I learned a lot of important lessons” – Strattam’s investment strategy is hardly a clone of Oak Hill’s larger, more generalist approach.

One significant difference is that “our target check size is much lower than what Oak Hill was pursuing in its most recent vehicle,” Morse said.

“The sweet spot of deal size was a mismatch with what (Morse) saw to be the attractive opportunity set, and the deals he’s best suited to pursue,” said the LP. “It was pretty natural for him to strike out on his own. And we like people who are like that.”

The Oak Hill fund also had a broader focus than Strattam’s, with a mandate that allowed it to invest in financial services, consumer products/retail, healthcare, media, and telecommunications, as well as basic industries, according to Oregon documents. As a sector specialist, Strattam will tailor its approach to the nuances of each of its portfolio companies, Morse said.

In addition to Polak, who oversaw a data center investment program at Rockwood Capital and was a senior advisor to Oak Hill’s tech team, Strattam’s team includes associates with backgrounds at Kohlberg Kravis Roberts and Vista Equity Partners.

That assemblage of talent proved beneficial to the firm’s first deal.

The firm “had a number of younger people – (but) not fresh out of school – who are really smart people as well, and that was something we believed we would be able to rely on,” said Doxim founder Rasmussen.

Strattam had its eye on Doxim even before the firm had raised LP capital. According to Rasmussen, the firm had yet to raise enough money to acquire Doxim at their first meeting, but the Strattam team assured him his company would be its first investment.

“We were excited about that,” he said. “We knew we weren’t going to be some 19th investment, some rounding error. We thought that was good because we knew we’d be getting a lot of dedicated attention through the first couple of months (of the investment), which is an important time.”

That deal, along with Strattam’s efforts to standardize Doxim’s internal reporting, will put the company in a better position to scale its growth across other platforms over time, Rasmussen.

Strattam can “strike that appropriate balance between giving the entrepreneur/management team the long leash they need to execute, while still giving the guidance they need to continue executing on their growth plan,” said the LP. “Bob, along with Adrian and the rest of his team, are well positioned to do that.”