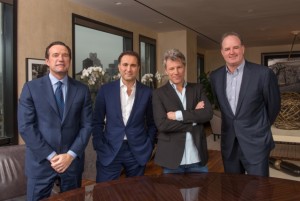 RedBird last year teamed with Bruin Sports Capital and the National Football League to launch On Location Experiences, which sells VIP packages to the Super Bowl and other marquee events. It then brought the “Livin’ on a Prayer” singer into the deal as both an investor and a manager.

Bon Jovi folded his own company, Runaway Tours, into On Location, building a music focus onto the sports-related company. The firm also brought in John Collins, former chief operating officer of the National Hockey League, to be CEO of On Location, a platform spun out of the NFL.

“This is what we love to do,” said Gerry Cardinale, CEO of RedBird and a former Goldman Sachs partner. “It’s a hands-on approach to investing that creates an inherent alignment with best-in-class operators and entrepreneurs. We have a passion for building companies, and we look to add value across a range of areas, which is easier said than done.”

Venture capitalists have been making big bets on rock-star managers for some time, but the phenomenon still isn’t as common in private equity. Besides RedBird, GPs that seek to back big-name executives include GTCR, Riata Capital, Pine Brook and Warburg Pincus.

This type of strategy is a way to return to the entreprenurial roots of private equity in merchant banking, when firms invested alongside founders and focused on growth, rather than leverage, to generate returns, sources said. It is perhaps more prevalent among newer shops, where GPs can tap into long-standing relationships with executives they have worked with before and have the ability to operate more nimbly than bigger, older outfits.

The challenge with this type of investing is that it is based on people. While an executive may have been the best at what he or she does for the past 20 years, there’s no guarantee of future success. Another risk: Backing rock-star managers means working with hyper-successful people who may have big egos and are used to having control, sources said.

“There are no statistics on using rock-star managers, but it’s something we do see,” said Ethan Vogelhut, executive director at Adveq, a firm that invests in middle-market buyout funds.

High-profile executives may not always be the best choice to lead a new or growing business, Vogelhut said.

“Those people do have broad networks and they understand the industry and the strategy they’re executing,” he said. “Even if [a GP] nabs a Fortune 500 executive, [the executives] typically have huge teams and much more of an institution behind them. If you’re starting something up, it’s a different skill set.”

Skin in the game

Cardinale said one of the keys to this type of investing is that the rock star manager invests alongside the firm. “Our focus is on proven business models where the founder of the business is heavily engaged and has written a check alongside us, so they have skin in the game,” he said.

This was the case with On Location, where Bon Jovi invested capital as part of the investor group and is also helping run operations as a manager of the business.

Other platforms at RedBird also reflect the strategy: Jerry Kent, most recently chairman and CEO of SuddenLink Communications, joined with Redbird and Ontario Teachers’ Pension Plan to invest in TierPoint, a data center roll-up. Albert Huddleston, founder of Aethon Energy, now works with RedBird on two ventures to develop oil and gas assets in the United States.

For Cardinale, these efforts embody the reason he launched RedBird in 2014 after retiring from Goldman Sachs.

“I had an entrepreneurial itch I needed to scratch,” Cardinale said during an interview in his office high over Madison Avenue. “I cringe when people refer to me as an asset manager. I want to be an investor, first and foremost.”

Although Riata Capital Group was formally launched only about a year ago, its roster of managers is time-tested, the Dallas based firm said.

The firm recently announced a partnership with Alan Shor, co-founder and president of The Retail Connection, a real estate advisory firm that represents more than 275 retail and restaurant chains, to pursue investments in high-growth, specialty retail and multi-channel consumer companies with EBITDA of more than $5 million. Shor, known for his turnaround efforts for jewelry retailer Zales, has been involved with past deals by Riata executives.

Launched by the founders of Brazos Private Equity Partners and Parallel Investment Partners, Riata Capital announced two other partnerships with industry executives. It teamed up with Brad Goebel and David Zachariah to zero-in on production-related energy services deals. The pair helped build up Accelerated Companies, an oil extraction equipment maker, from $20 million in enterprise value to $430 million prior to its sale in 2014 to Dover Corp.

Riata also lined up John Eramo and Steve Roberts for marketing services companies after the two worked at Executive Greetings Inc, a designer and distributor of promotional material, and as operating partners on Personnel Concepts, Quartermaster, Hinda Incentives and LogoSportswear.

“Part of what this allows us to do is be prepared, knowledgeable, researched and faster,” he said. “The challenging part of any process is the compressed timing and speed and the ability to take enough time to truly understand the business. Instead of starting on home plate, we try to start on third base.”

William Spiegel, a founding partner and managing director of Pine Brook, prides himself on finding unmet needs in financial services and working with established executives to fulfill them.

For example, Pine Brook spotted an opportunity to start a mortgage insurance company in the wake of the collapse of Lehman Brothers. Spiegel turned to Mark Casale, an insurance executive who had worked at Radian Guaranty and elsewhere.

With Casale at the helm, Essent Group, a specialist in private mortgage insurance and a reinsurance provider for mortgages secured by U.S. residential properties, went public in 2013 and raised $335 million. It now sports a $1.8 billion market cap.

“We’re working with well-established industries and we’re growing complicated and capital intensive businesses,” Spiegel said. “There are always opportunities to back great executives — rock-star executives — and map out a multi-year capital plan.”

With a buyout, the money gets invested up front by essentially putting risk into the capital structure and leveraging the cash flow stream, Spiegel said. Pine Brook may invest $10 million or less to help a company find and build up its office space and hire employees. It may then deepen its investment as the business takes off.

“The biggest risk is in the early stages of an investment,” Spiegel said. “We face execution risk. We don’t take product or market risk.”

Here’s how the return math works for Pine Brook:

If a business it starts ultimately generates a 15 percent annual return on equity, it will double its book value every five years. Since financial services businesses that generate a 15 percent return on equity typically trade between 1.5x to 2x book value, that means Pine Brook can generate returns on its invested capital in excess of 3x book value over a five-year period, or an IRR in the mid-20s, Spiegel said.

“Effectively we create businesses that generate cash flows, and we can sell those cash flows at a premium,” he said.

“The whole strategy has to be — not only is there a macro opportunity, but who is the CEO?” Spiegel said. “I’d rather back a great CEO in a mediocre industry, than invest with a mediocre CEO in a great industry.”