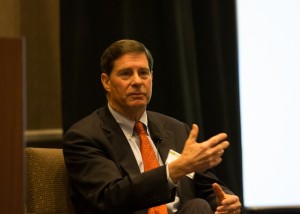 HarbourVest Partners is in the market with its first ever commingled mezzanine fund targeting $250 million, according to a limited partner who has heard the pitch.

HarbourVest is an investor in mezzanine debt, but has not had a commingled fund dedicated to the strategy until now. It’s not clear why the fund-of-funds manager decided to launch the fund this year.

Laura Thaxter, principal in marketing and client communications, didn’t respond to a request for comment.

“Despite the fact they’ve been mezzanine investors for years, the previous investments were co-invest and other fund programs,” the LP said.

HarbourVest Mezzanine Income Fund will have an eight-year term and a three-year investment period, the LP said. The fund will charge a 1 percent management fee on committed capital in years one through five, a 12.5 percent carried interest rate and an 8 percent preferred return.

These terms are below market rate for mezzanine funds, according to a separate LP who invests in the strategy.

The fund will make mezzanine investments primarily in small- to middle-market U.S. companies with enterprise values of less than $1 billion, according to a September report from HarbourVest’s listed affiliate HarbourVest Global Private Equity (HVPE). The listed firm committed $25 million to the mezzanine fund, the report said.

Mezzanine fundraising has picked up in recent years after experiencing a slump after the Global Financial Crisis. As of August, 20 funds raised $16.8 billion globally, according to Preqin. That compares to 32 funds that raised $9 billion last year and 43 funds that raised $17.4 billion in 2013.