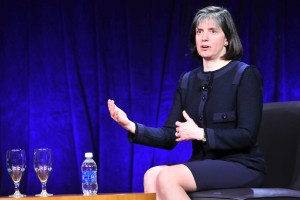 Jane Mendillo of Harvard at PartnerConnect 13

But it will be tougher, she acknowledged. “It will be more challenging now.”

While many have given up on active management and the high fees of hedge funds and private equity, Harvard is sticking with its strategy, plowing money into hedge funds, private equity and real assets.

Currently, Mendillo and her investment team see potentially promising private equity investments even in slow-growing Europe. She said the endowment has looked at making investments in Turkey and she still likes natural resource investments at a time of rising global demand for food, energy and infrastructure.

She also sees bright spots in the United States with a rebound in the housing market, an improving employment picture and low borrowing costs, she said.

Thanks to its size and investing talent, Harvard has often seized on lucrative opportunities early, Mendillo said, noting, however, that now there are ever more competitors crowding into the same kind of trades.

While Harvard’s investment record remains eye-popping, the school, like other investors, faced tough times in the wake of the financial crisis.

After that decline, Mendillo, who took the top job at Harvard Management just as the financial crisis was hitting in 2008, restructured the portfolio and cut back on real estate holdings.

Still she has stuck by the school’s hybrid investing model, where a portion of the endowment is managed in-house while a good chunk is given to outside managers, many of whom once worked at Harvard Management.

The university does not disclose its outside managers, but people familiar with its portfolio said that hedge funds Baupost Group, Highfields Capital and Convexity Capital, run by people who used to work at Harvard Management, have all invested money for the school.

Harvard’s hybrid model differs from those of most universities, including Yale, where virtually all of the money is managed by outsiders.

Although Harvard has often been criticized for the high salaries it pays its best performing in-house managers, Mendillo said on Wednesday that the school is effectively getting a very good deal by sticking to this model. “This is a very cost effective way to manage money,” she said noting that Harvard retains transparency and control this way.

While she acknowledged that investment managers working for the university can earn big paychecks if they outperform their benchmarks, she said their fees are still significantly lower than those that successful hedge fund managers earn.

“It is more expensive to use outside managers,” she said, adding, “We pay them more now than when they worked for Harvard.”